Things have happened quickly this month. The adventure has turned full circle and I am writing this in my garden as I did one of my first posts. The garden has grown without us. 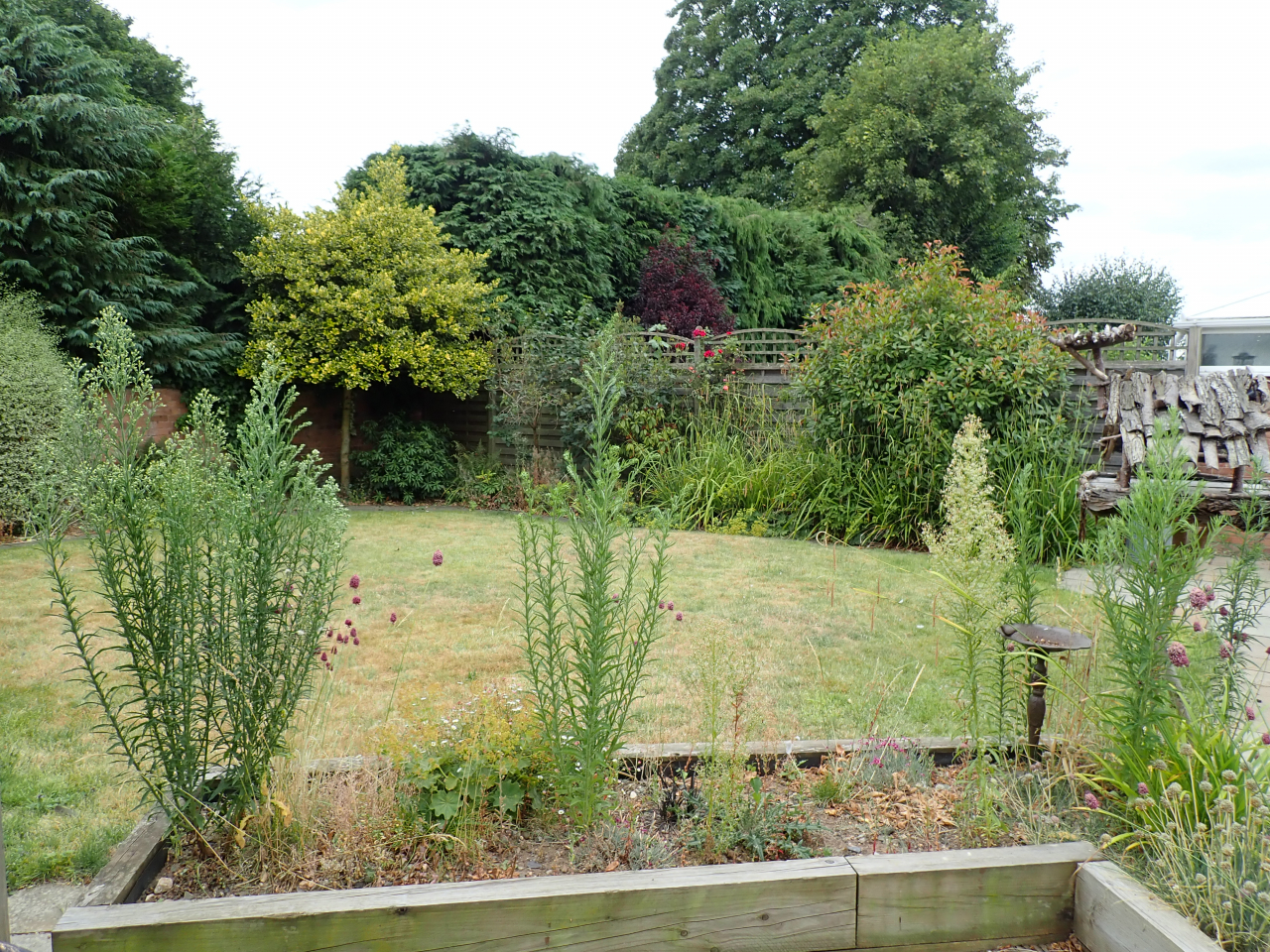 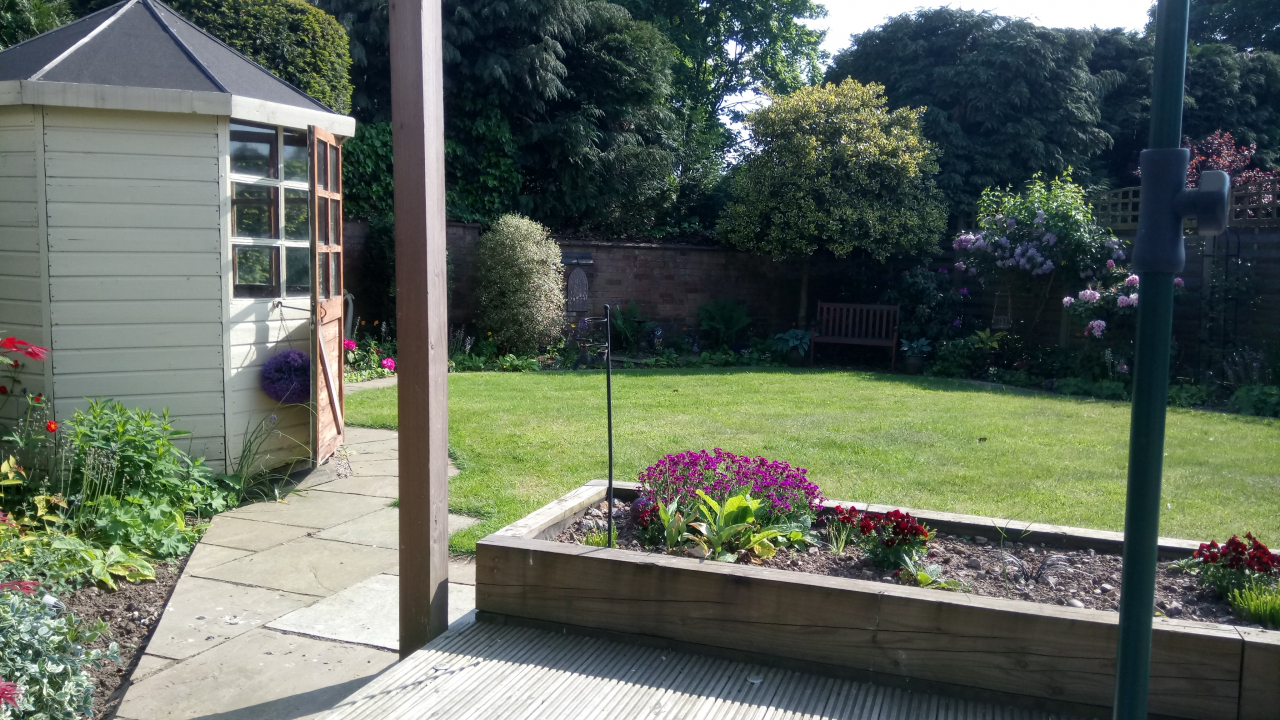 After a week at Ramsgate we headed to the Medway towns.

Gillingham cannot claim to be one of the prettiest town in the county but the weather was good and the park by the river had an outside swimming pool found good trade in the warm summer weekend.

Chatham was once a thriving naval dockyard. Graham recalls a trip there as a young boy and visiting the ships and going on board a submarine with his father. A navy poster was displayed in his bedroom for a few years after. He never did join the navy but in the end, he did get to go to sea.

The docks have now become a marina and leisure area. 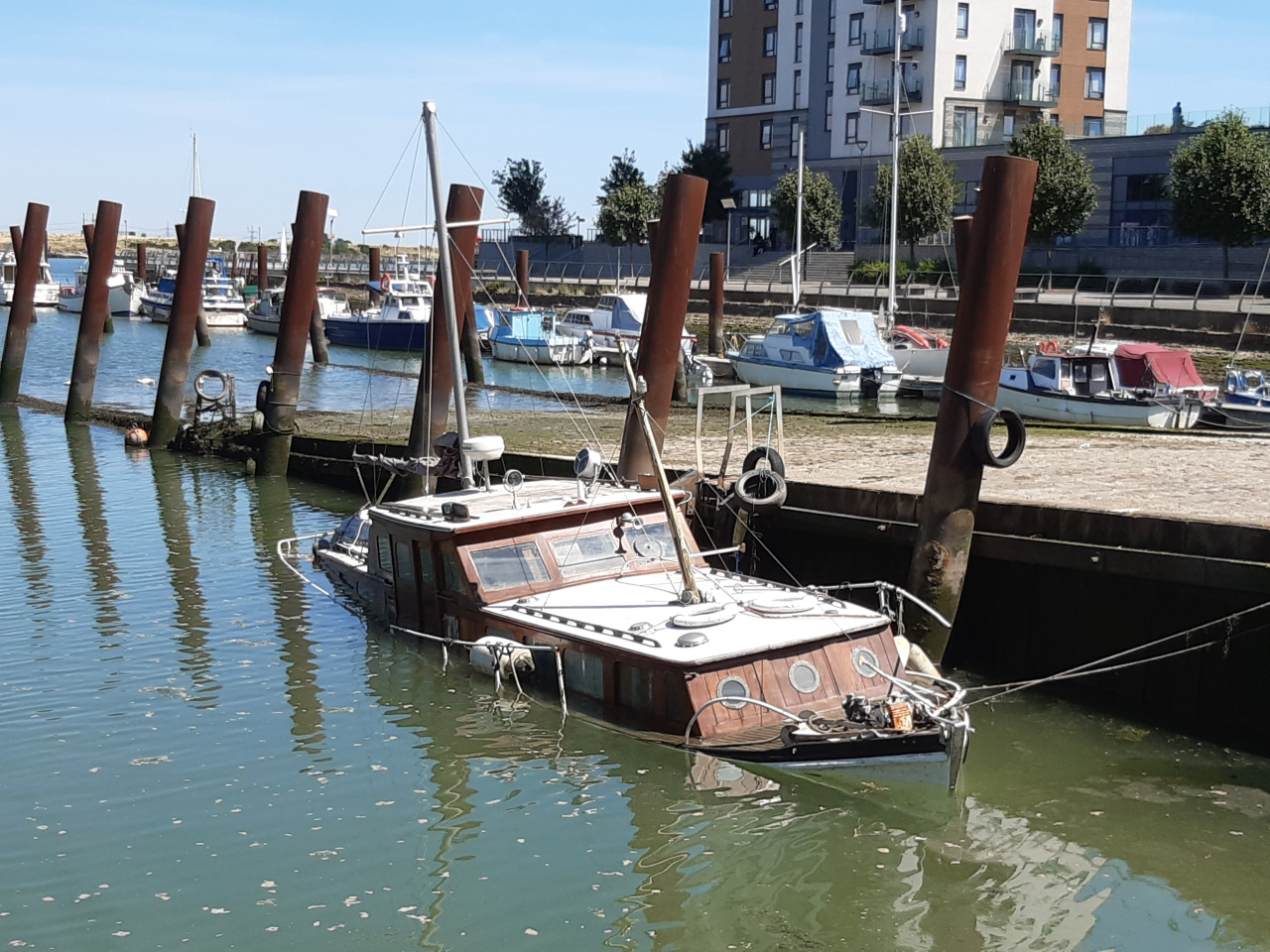 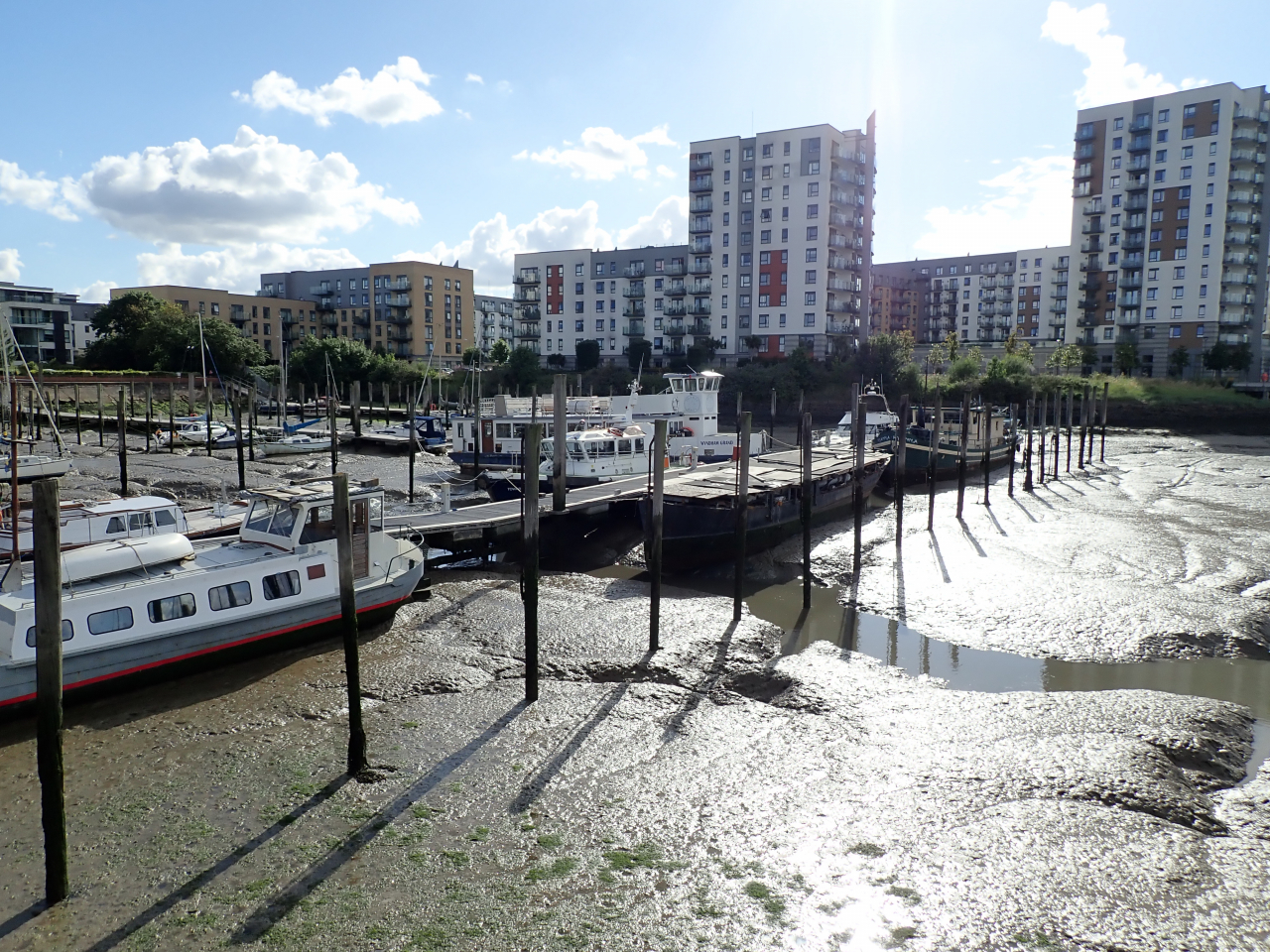 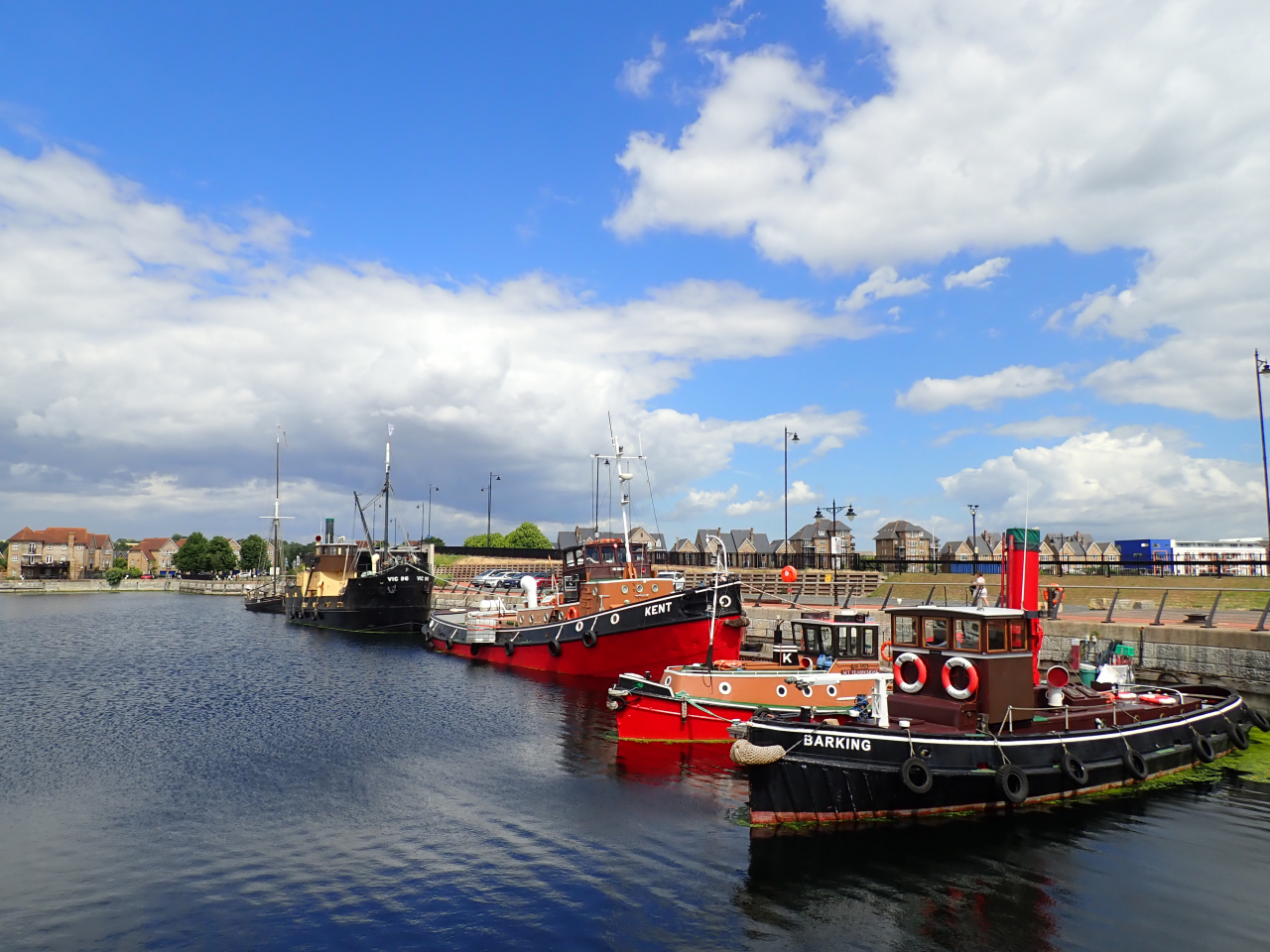 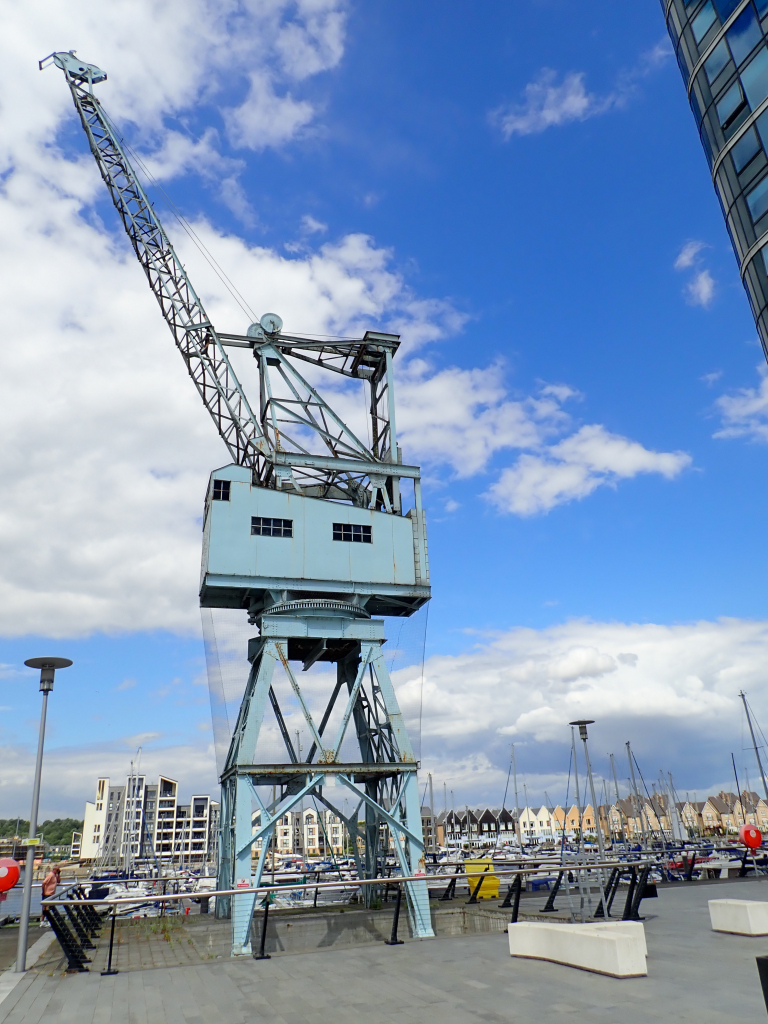 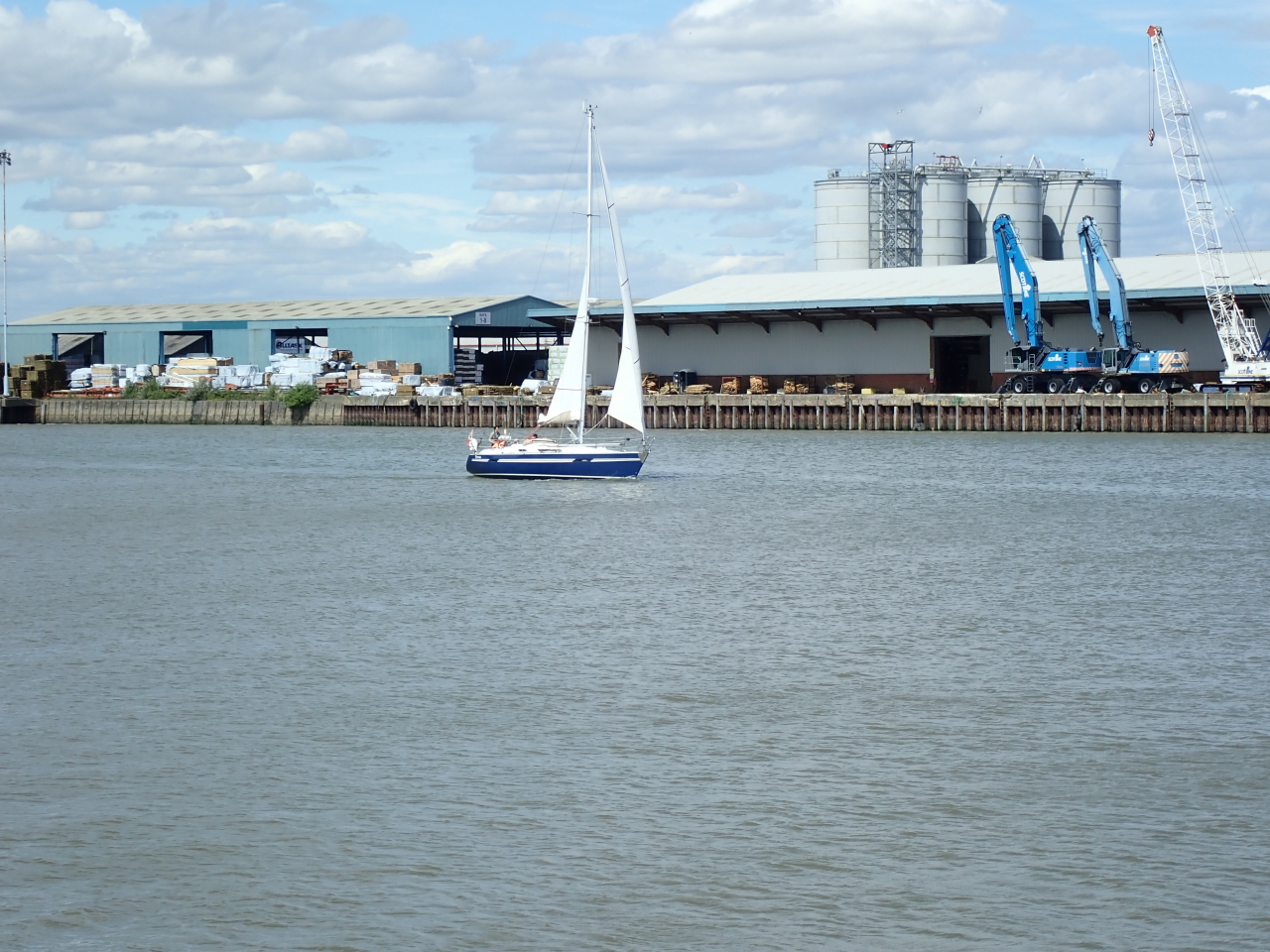 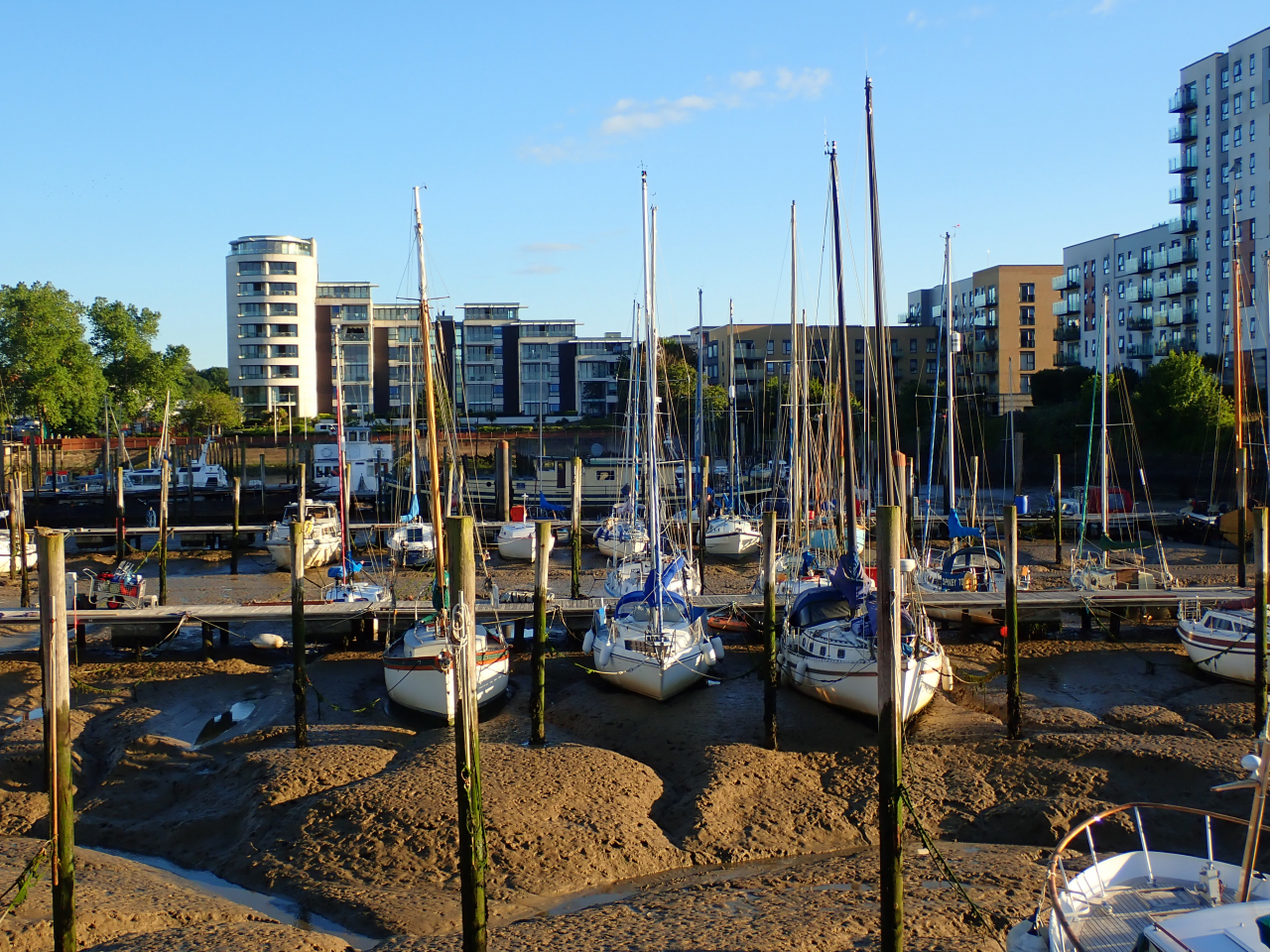 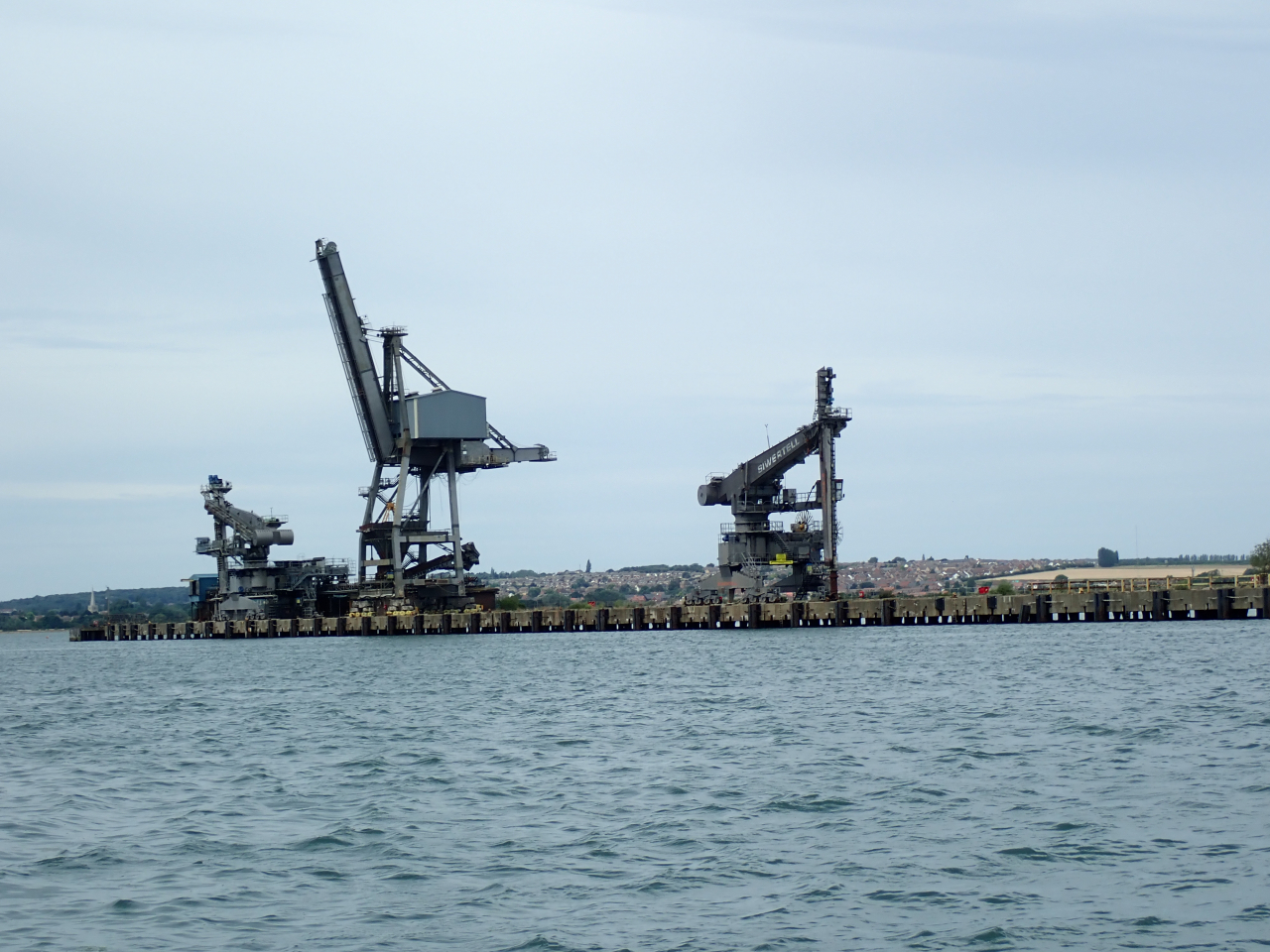 Rochester is a few miles away but a great contrast. It has a castle and a fine cathedral. The High Street has many fine buildings. Charles dickens lived in the town and links are to be found all over the town. you can visit the Six Poor Travellers House inspired a short book by Dickens “The Seven Poor Travellers”. The house provided overnight accommodation and food for poor travellers for one night. The town museum in the Guild Hall is also worth visiting and had a new exhibition on the life of Charles Dickens that opened this year. 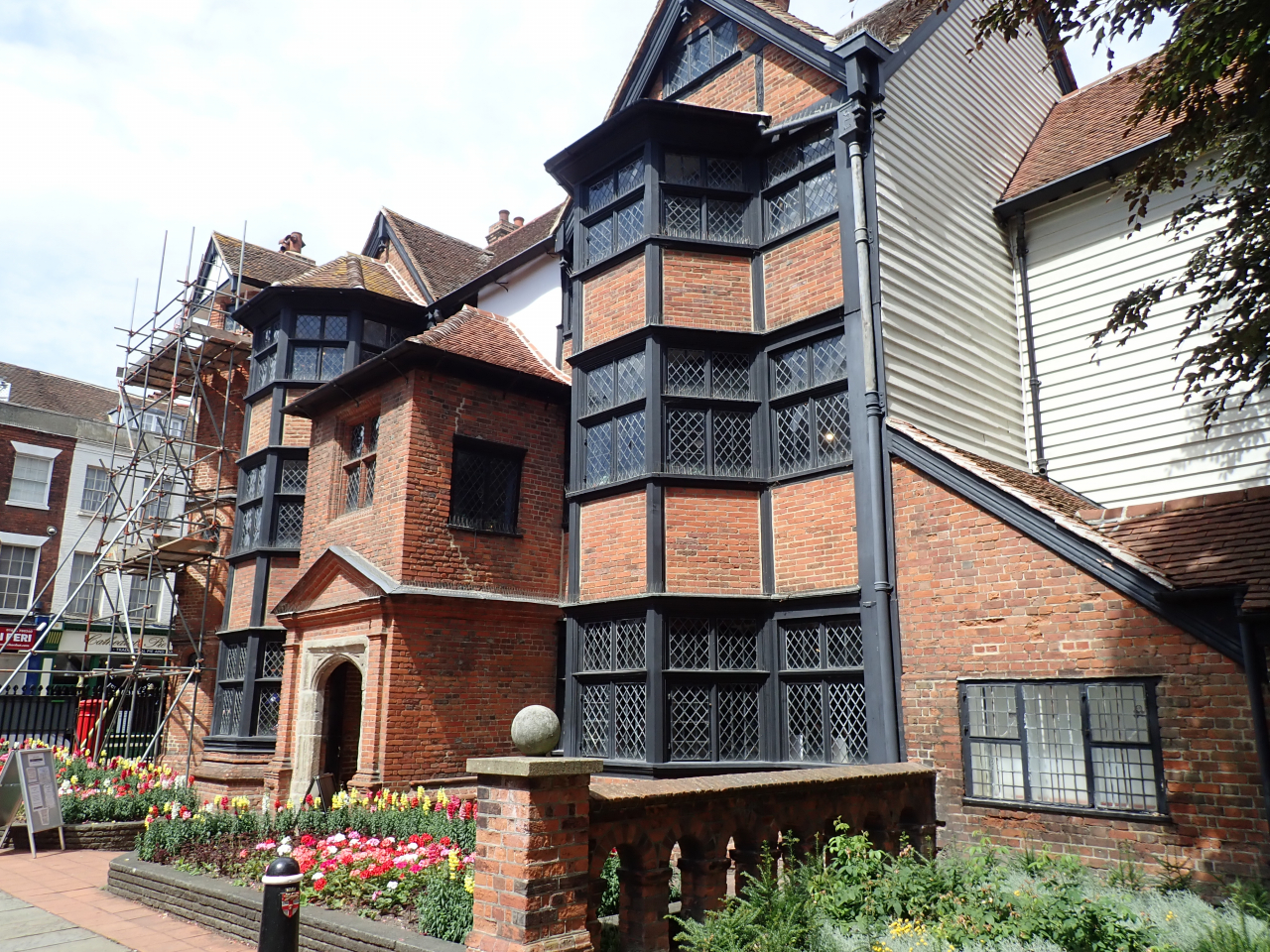 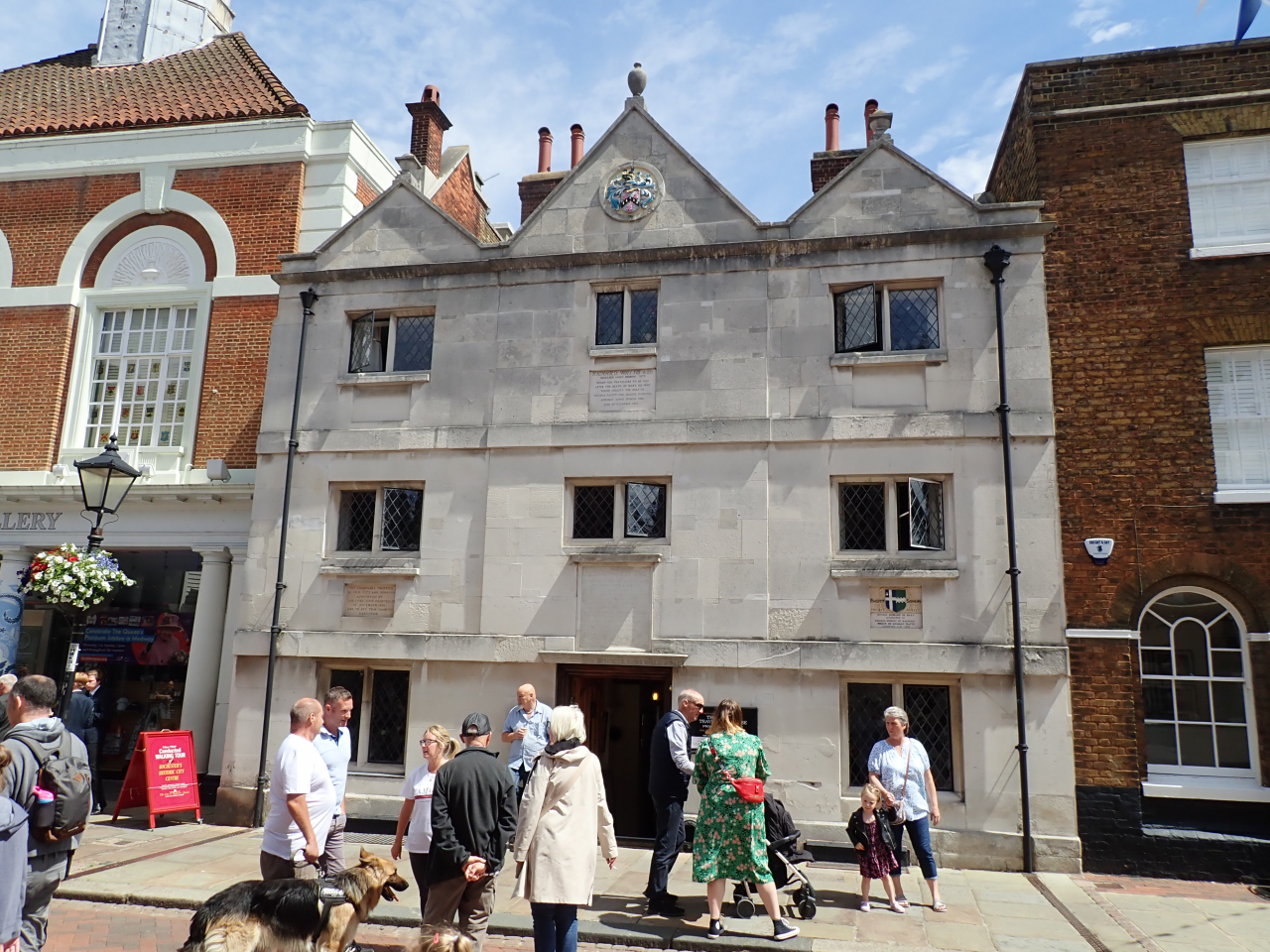 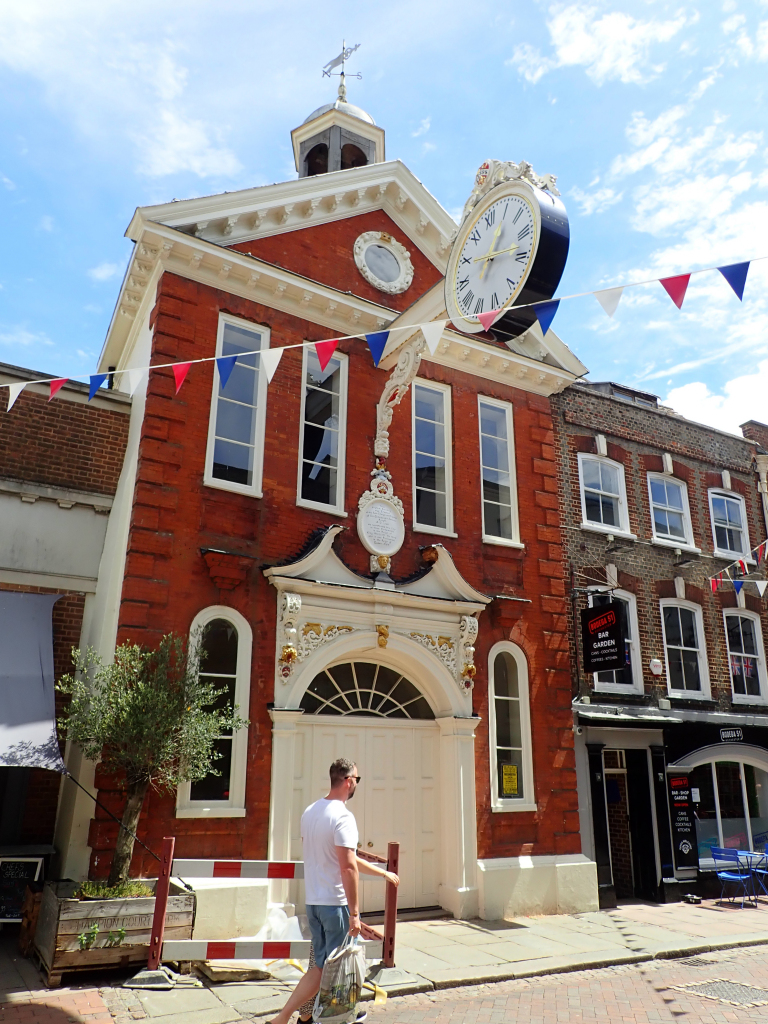 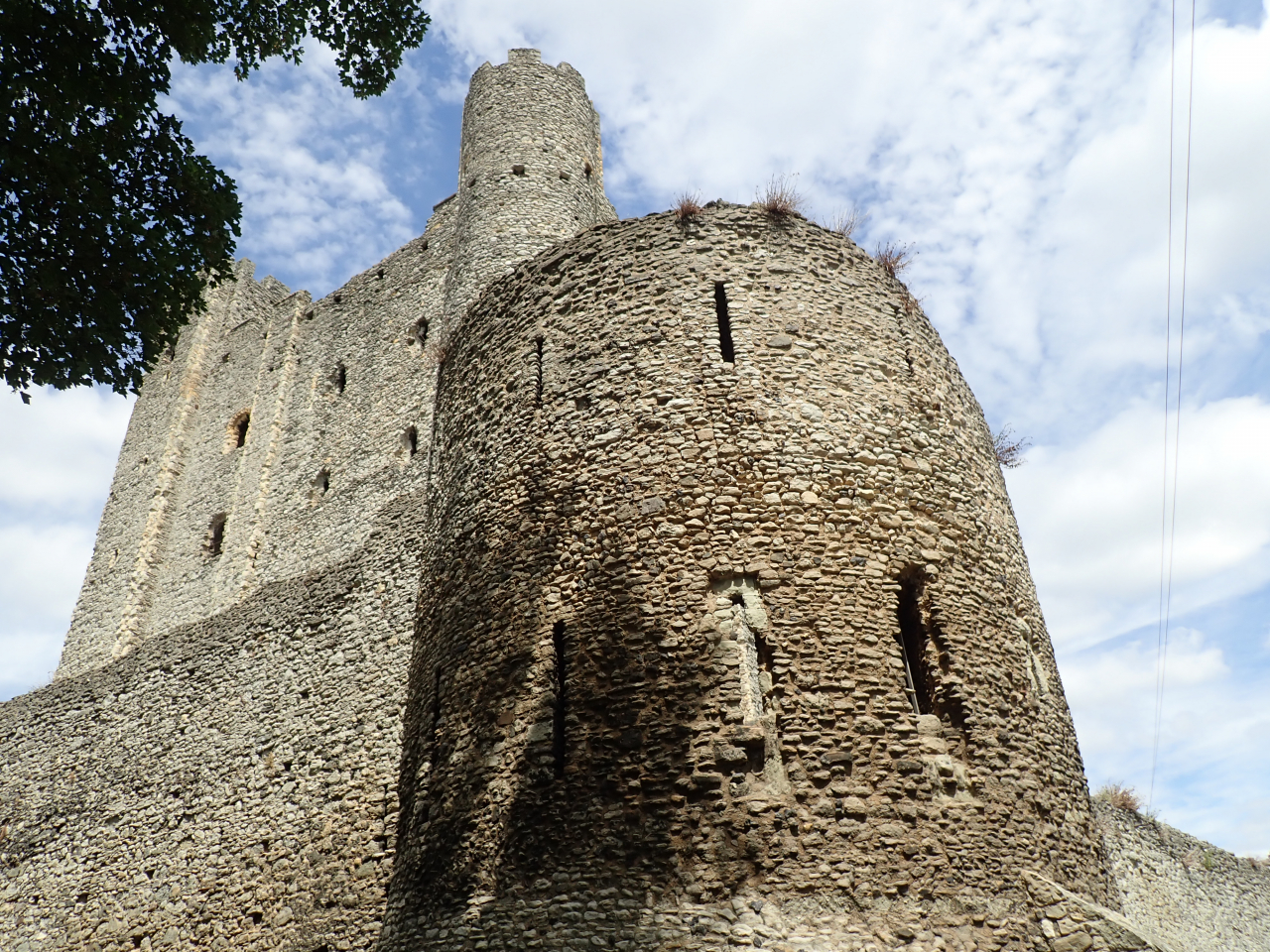 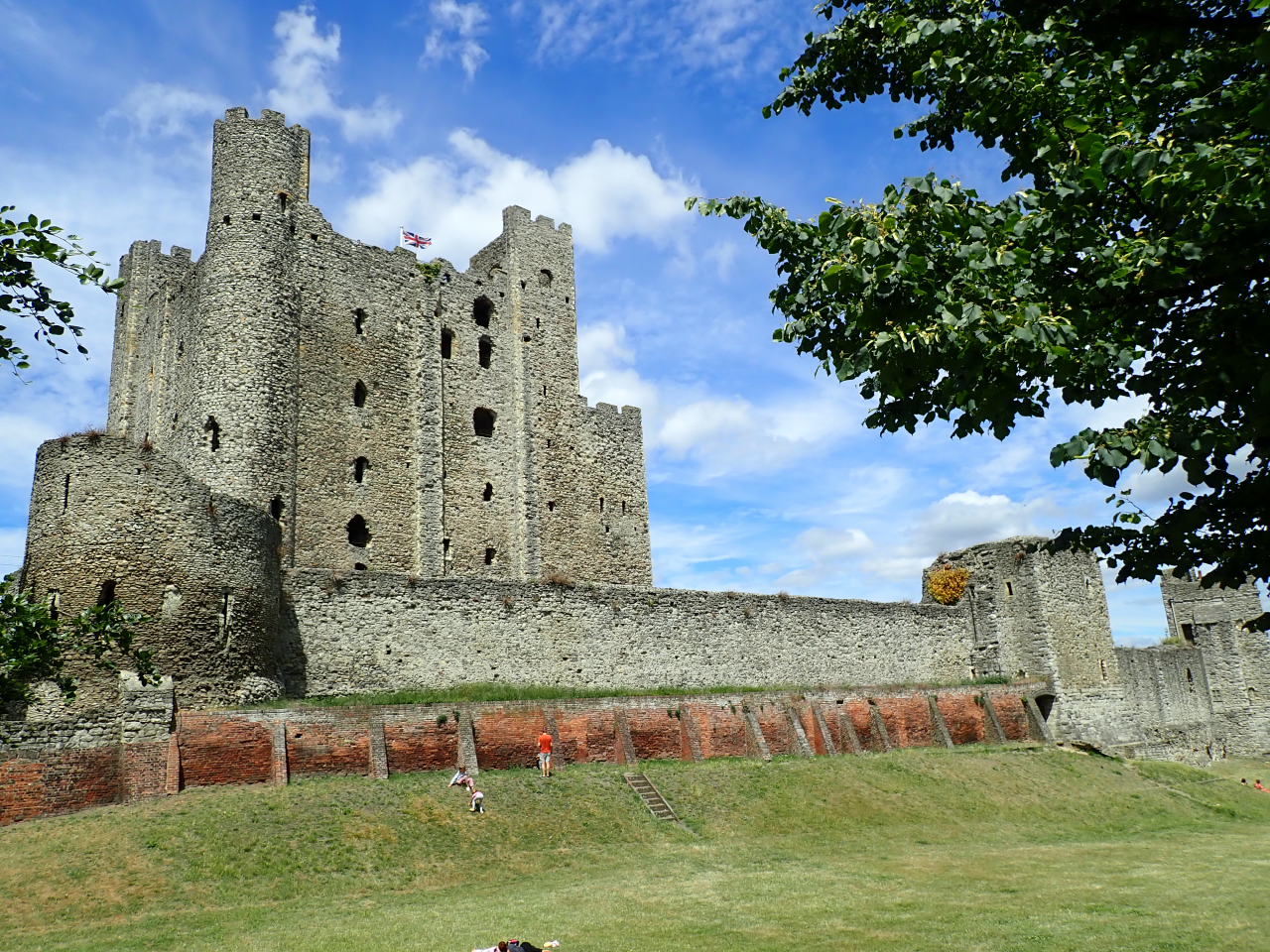 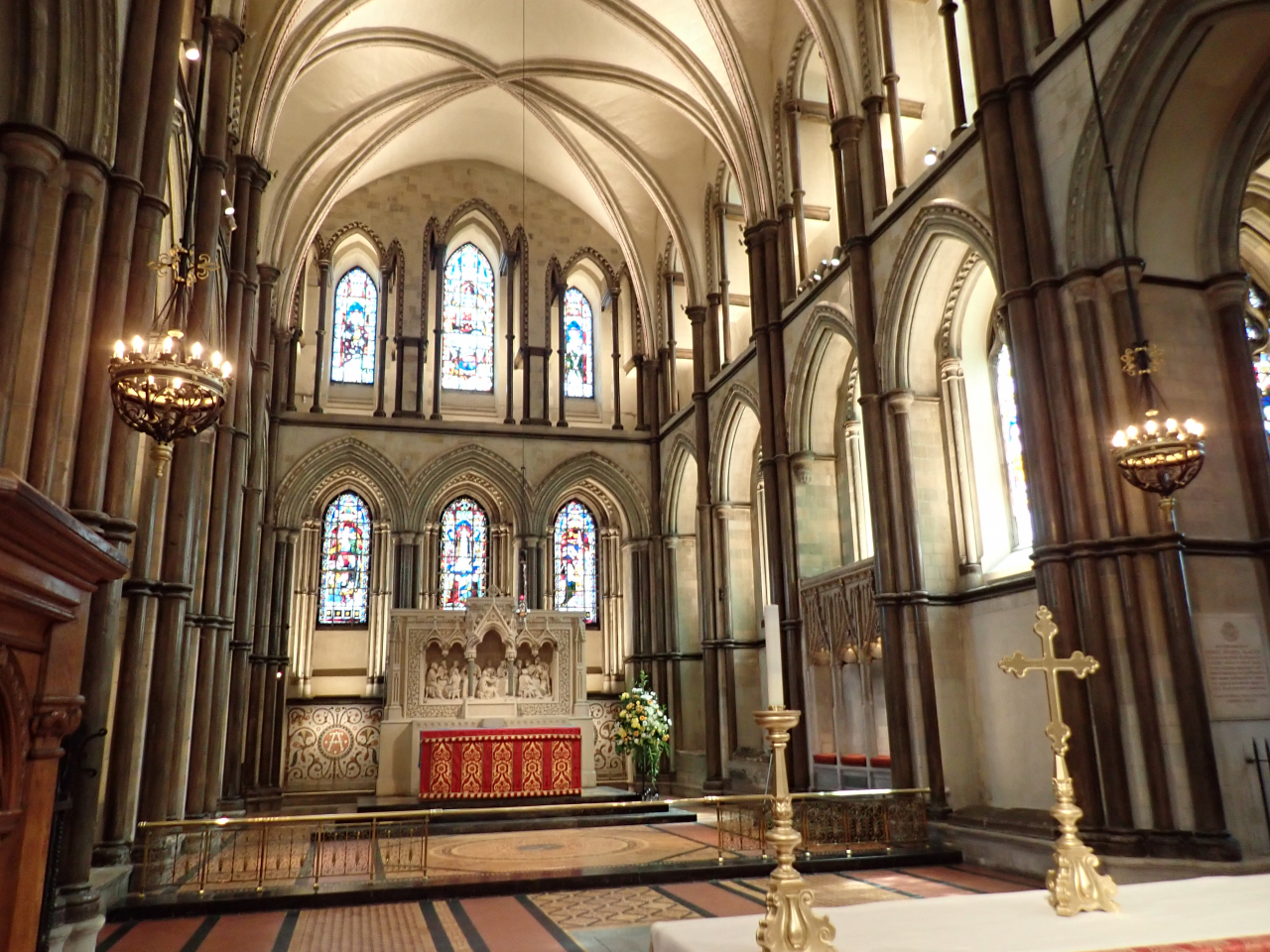 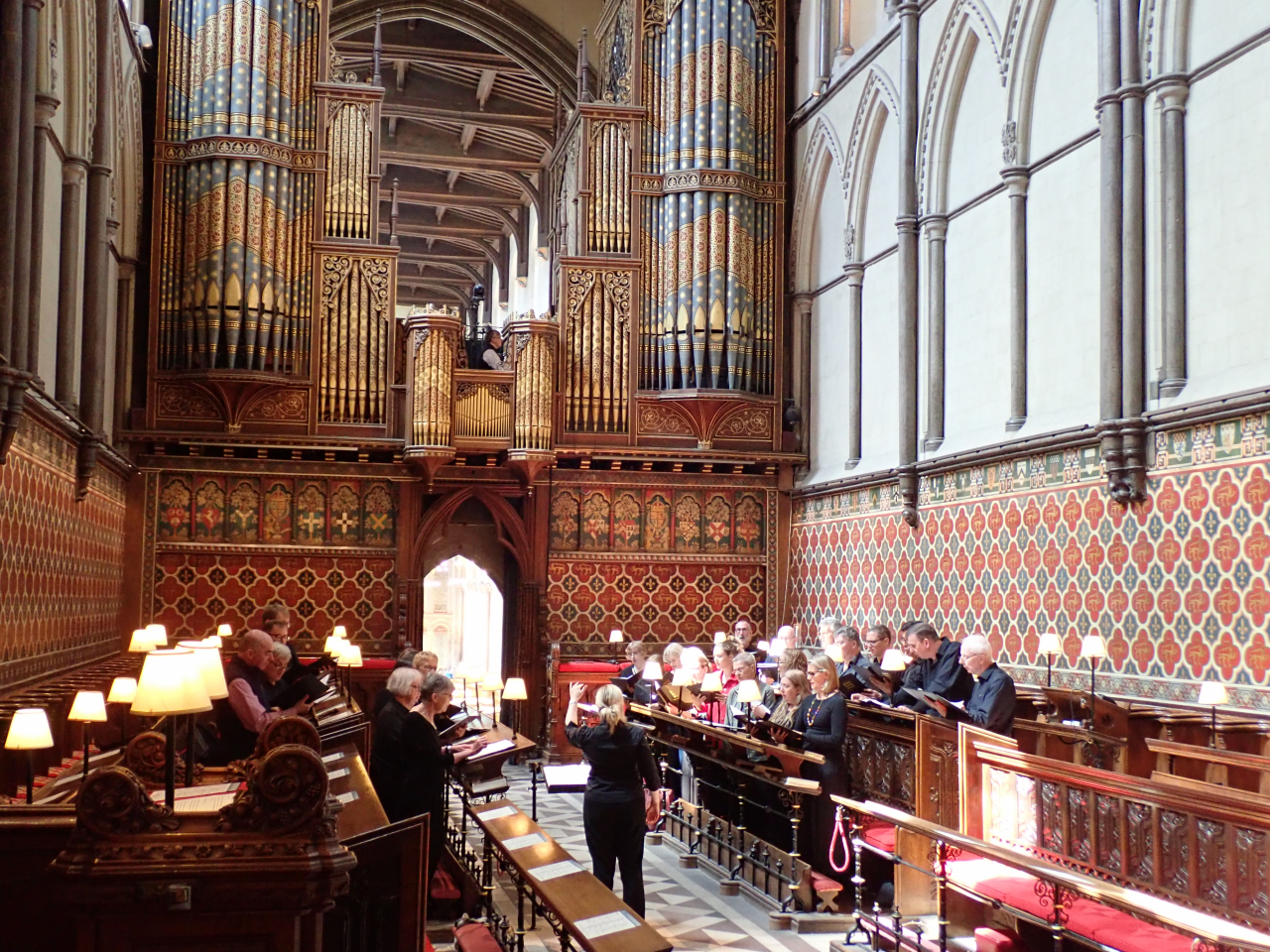 After a visit to check our house out and celebrate our grandson’s first birthday, we left Gillingham and in light winds ghosted down the river for a few hours to Queenborough pier on the Isle of Sheppey for the night. A boat arrived a few hours later and came alongside us still under sail. We thought they were just trying to save diesel but their engine had refused to start. They made a good approach and were soon tied up safely alongside us and were able to fix the engine so they could continue their voyage in the morning.

We also left in the morning bound for Harwich. As you leave the Medway and pass out onto the Thames you pass the masts of the wreck of the Ss Montgomery poking through the water. This vessel sunk in the second world War and is full of explosives. You are not allowed to get too close as there is a risk of an explosion. Apart from the risk to boats nearby, the explosion would cause extensive damage to Sheerness and Southend.

There was little wind as we made our way across the Thames the red sands forts were in the distance and commercial shipping was making its way up and down the river. It was so calm Judith got the polish out and started working on the stainless steel.

We passed by the range at foulness under the watchful eye of the range safety boat. We could hear they were testing munitions. We read later that only an hour or so before we passed they had had to escort a boat that was lost out of the danger area. The boat was taken by the Burnham on Crouch lifeboat to Burnham Yacht Harbour. The vessel had been bound for Mersey Island. The boat had insufficient fuel for the trip, no charts and no VHF radio. The report on the RNLI page said the coast guard had visited the boat in Burnham to give advice.

As we approached the shallow water just north of the Crouch the wind changed abruptly from nothing to 20 knots. The boat speed increased to around 7 knots but we were able to hold our course through the gap in the sand banks.

Once through we turned towards Harwich. We were sailing fast into the wind and small waves were building but nothing too uncomfortable. As we approached Clacton we had to make a tack as we could not hold a direct course for Harwich.

We approached Harwich and sailed past the huge container ships at Felixstowe.

We visited halfpenny pier in April. This time we could not get a berth on the inside but had to stay on the outside, the boat moved around all night and wasn’t particularly comfortable. 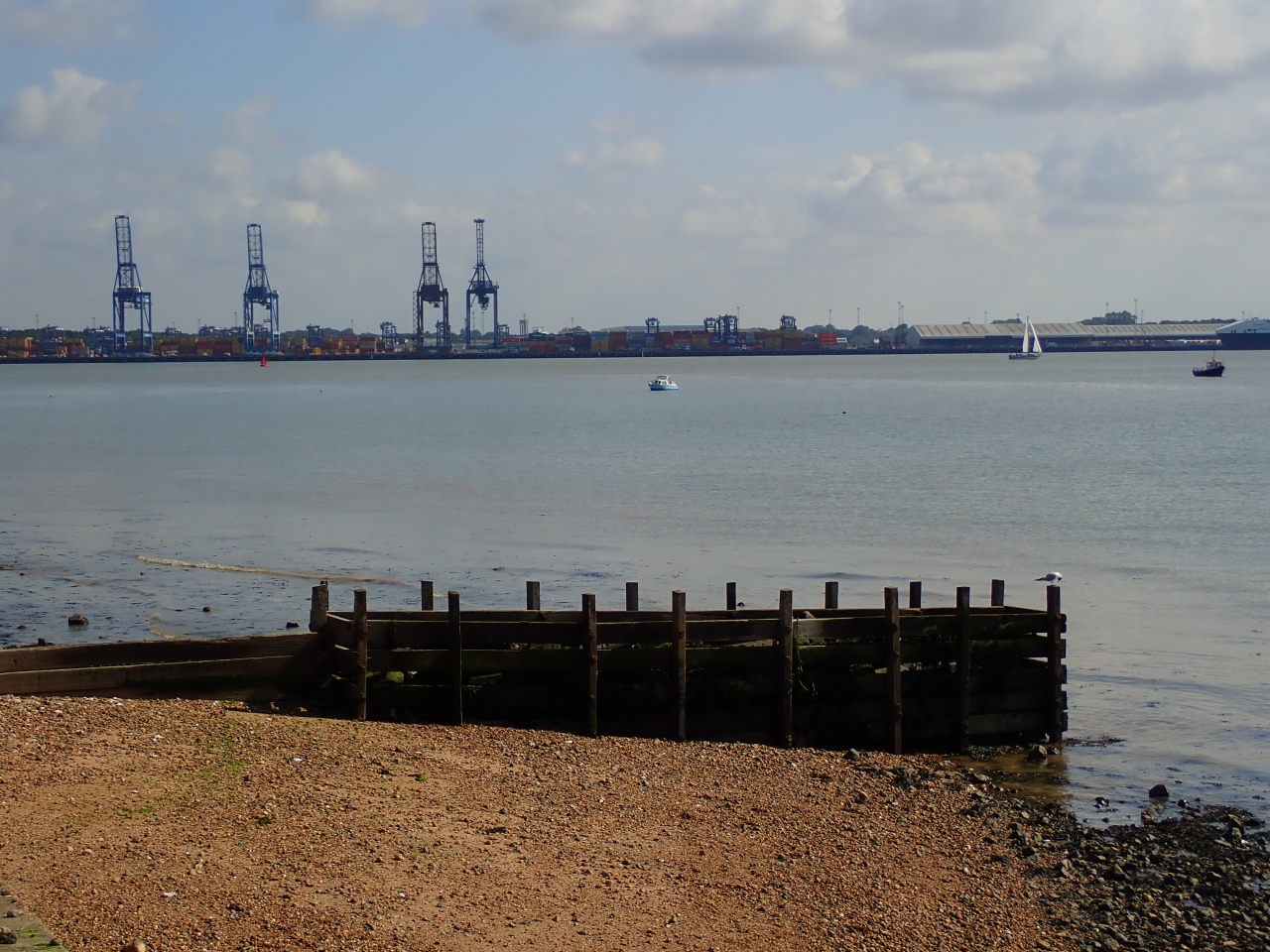 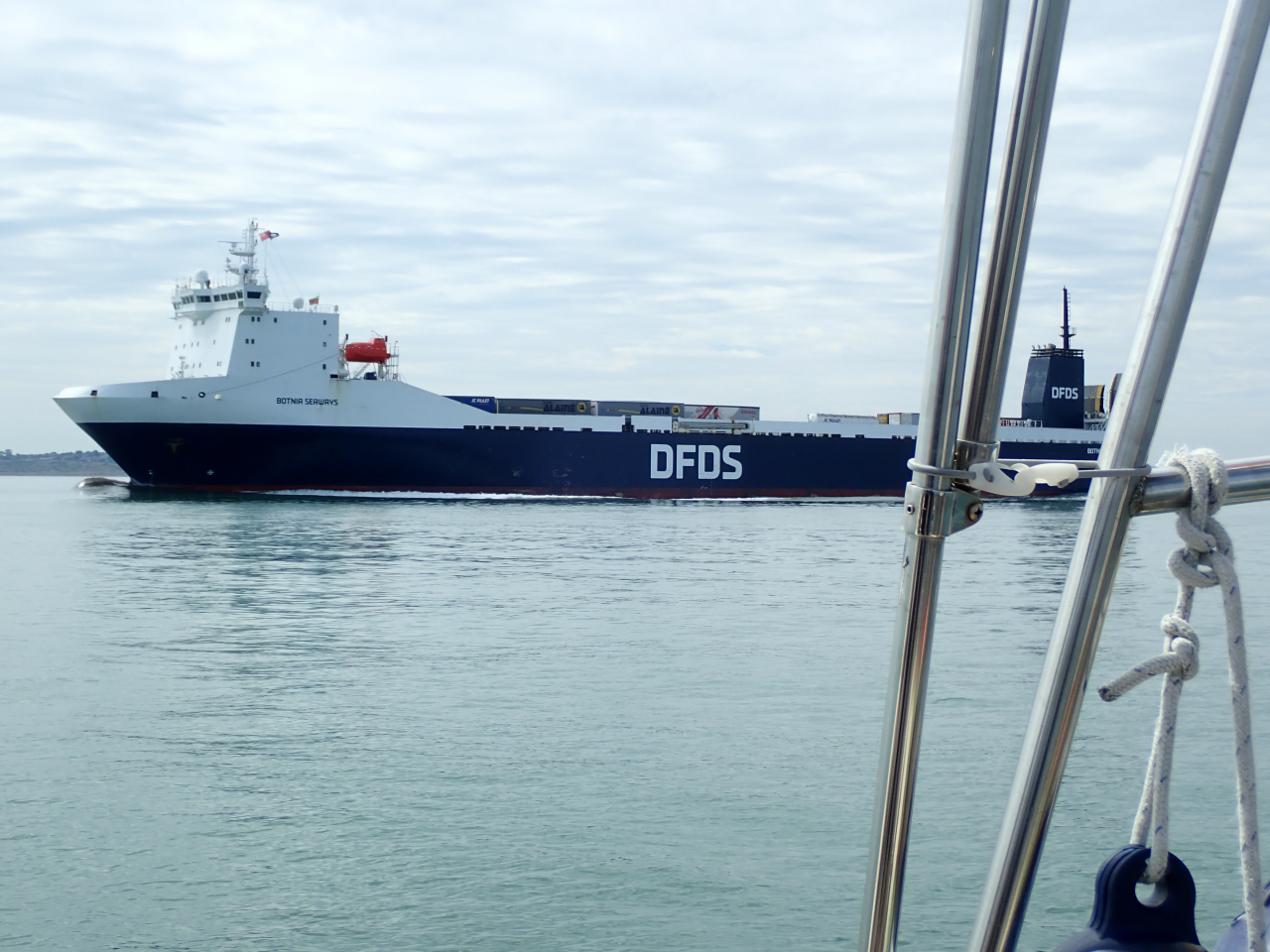 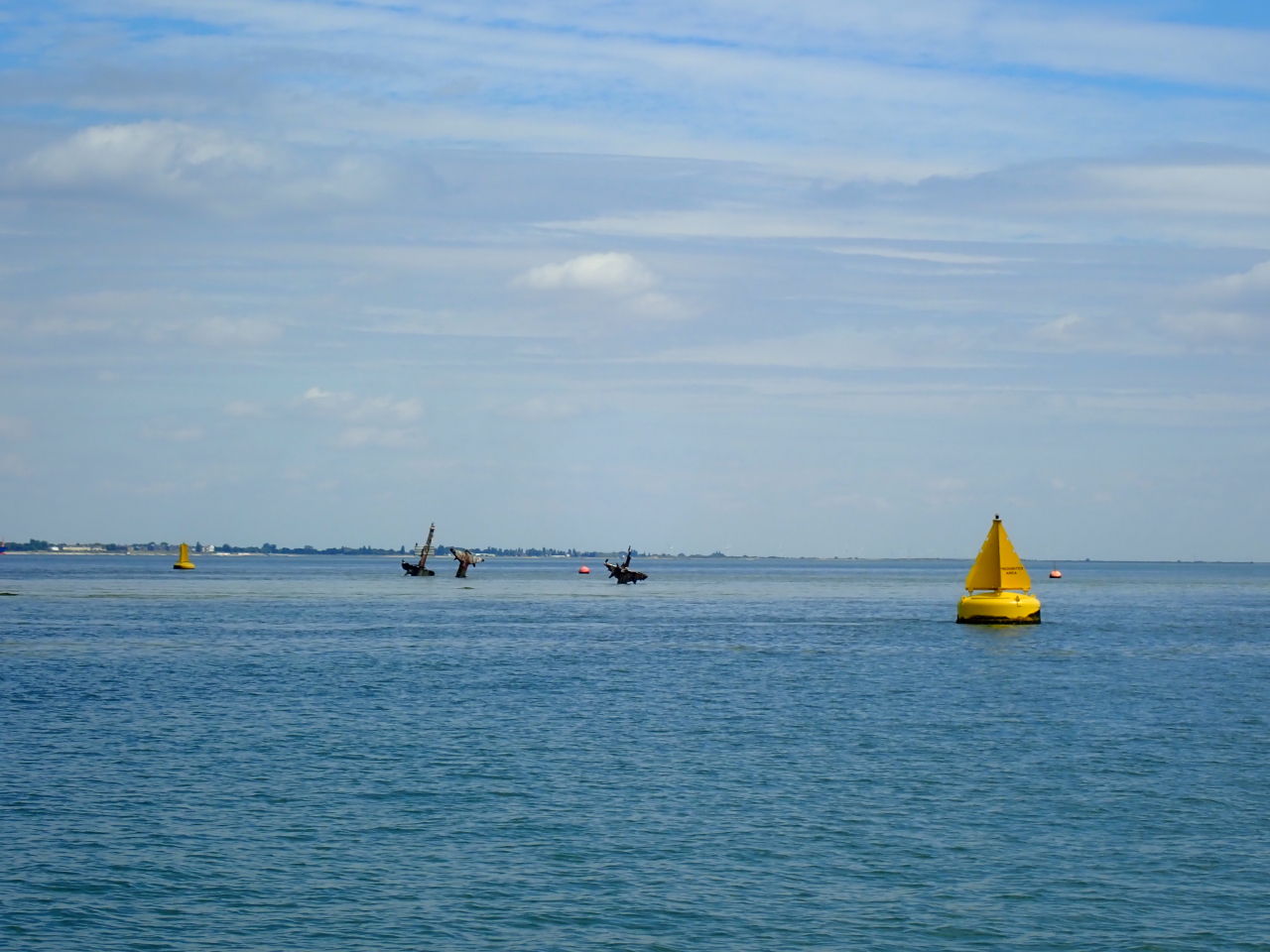 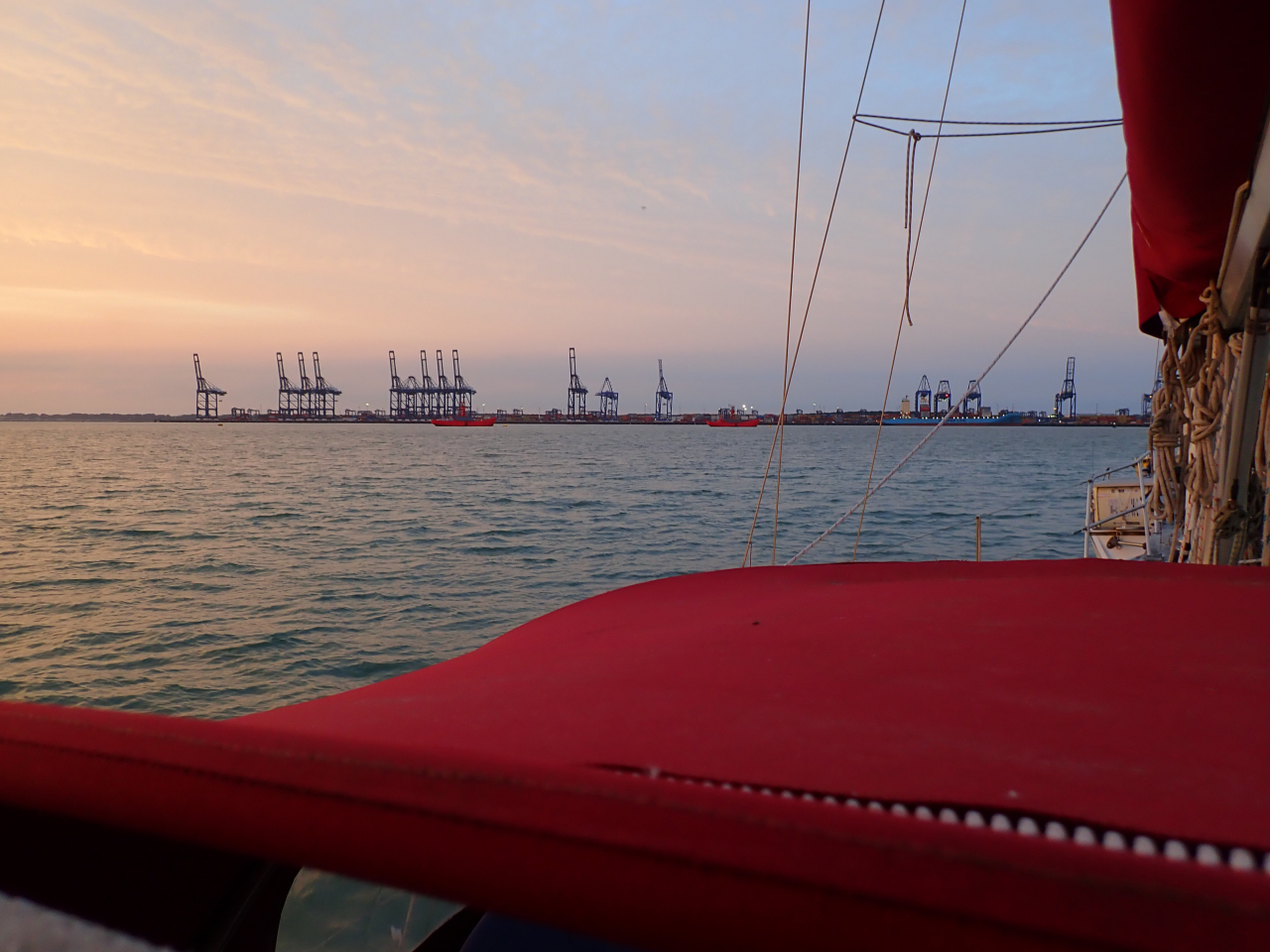 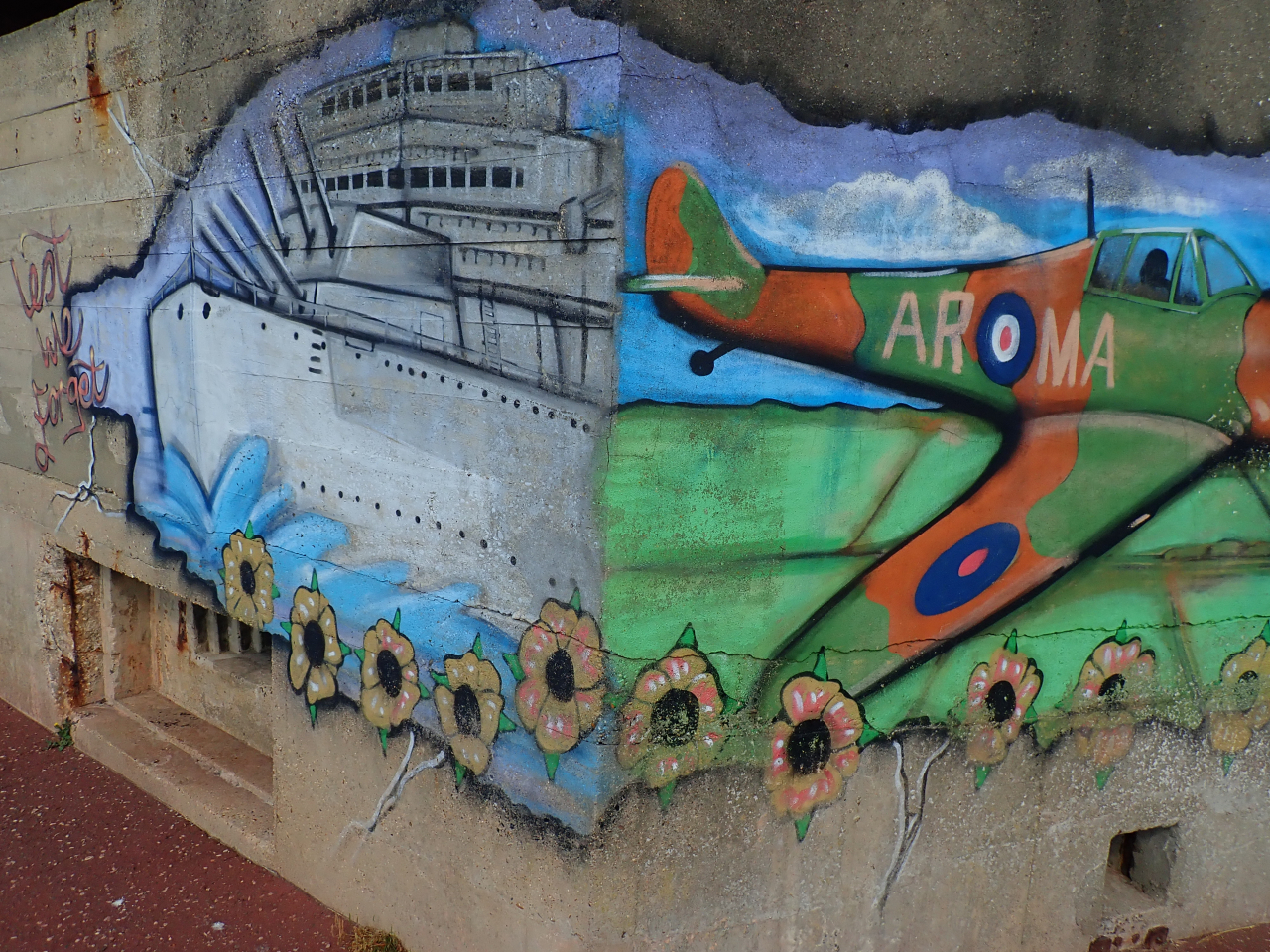 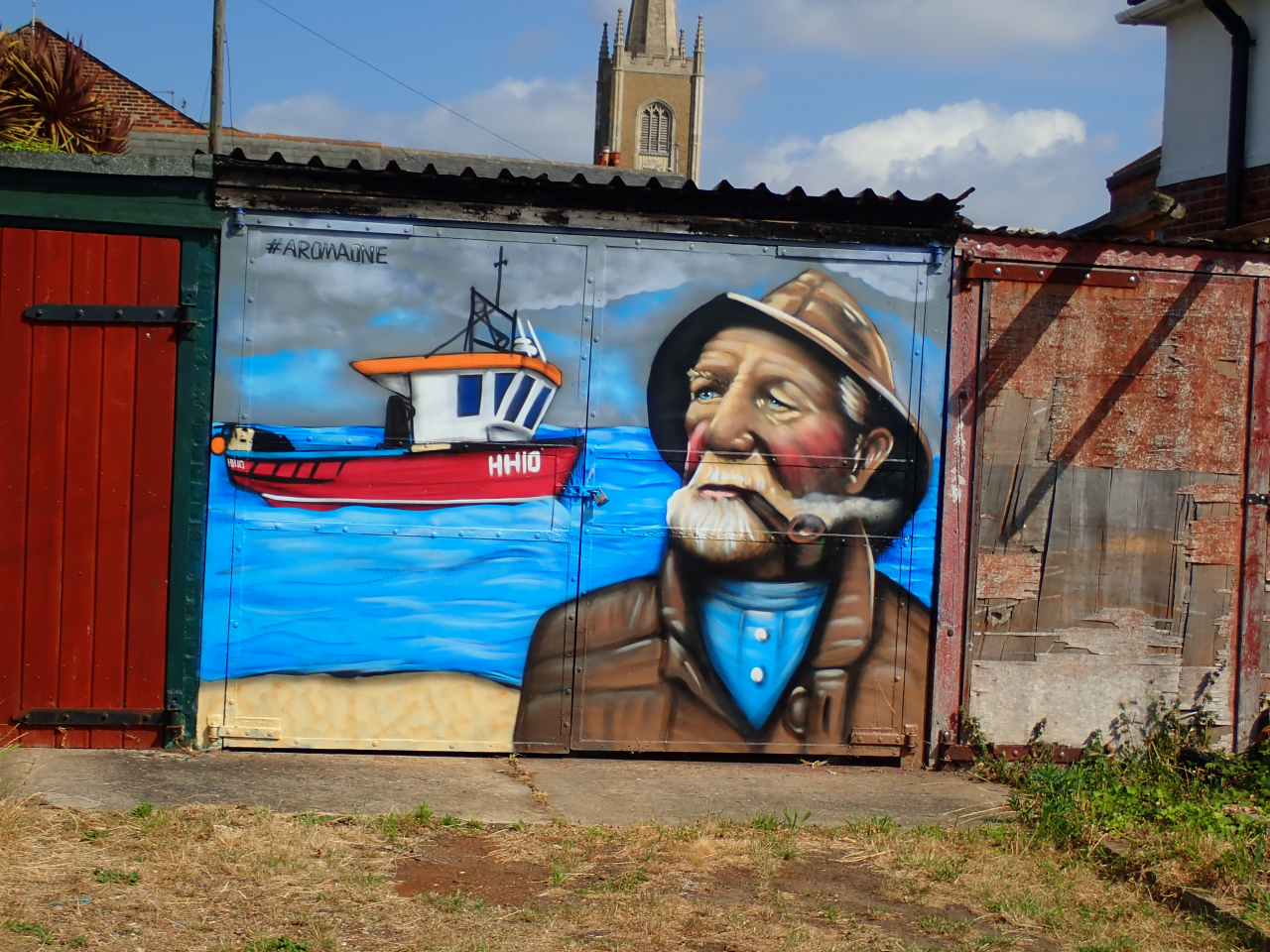 We made our way up the River Orwell to Ipswich, we decided it would be good to stay in the centre. We were going to prepare her for sale so it would be easier to rent a van and clear our belongings off in central Ipswich.

Ipswich is an interesting town we found two museums that are worth a visit if you are in Ipswich. The town has many old buildings as it was once an important port. It still has a busy commercial dock with coasters loading and unloading both in the wet dock and on the quays along the river.

Graham had an ex-work colleague from his days at Marconi some 30 years ago who he knew still lived in Ipswich. Graham tracked him down and we met up to reminisce. 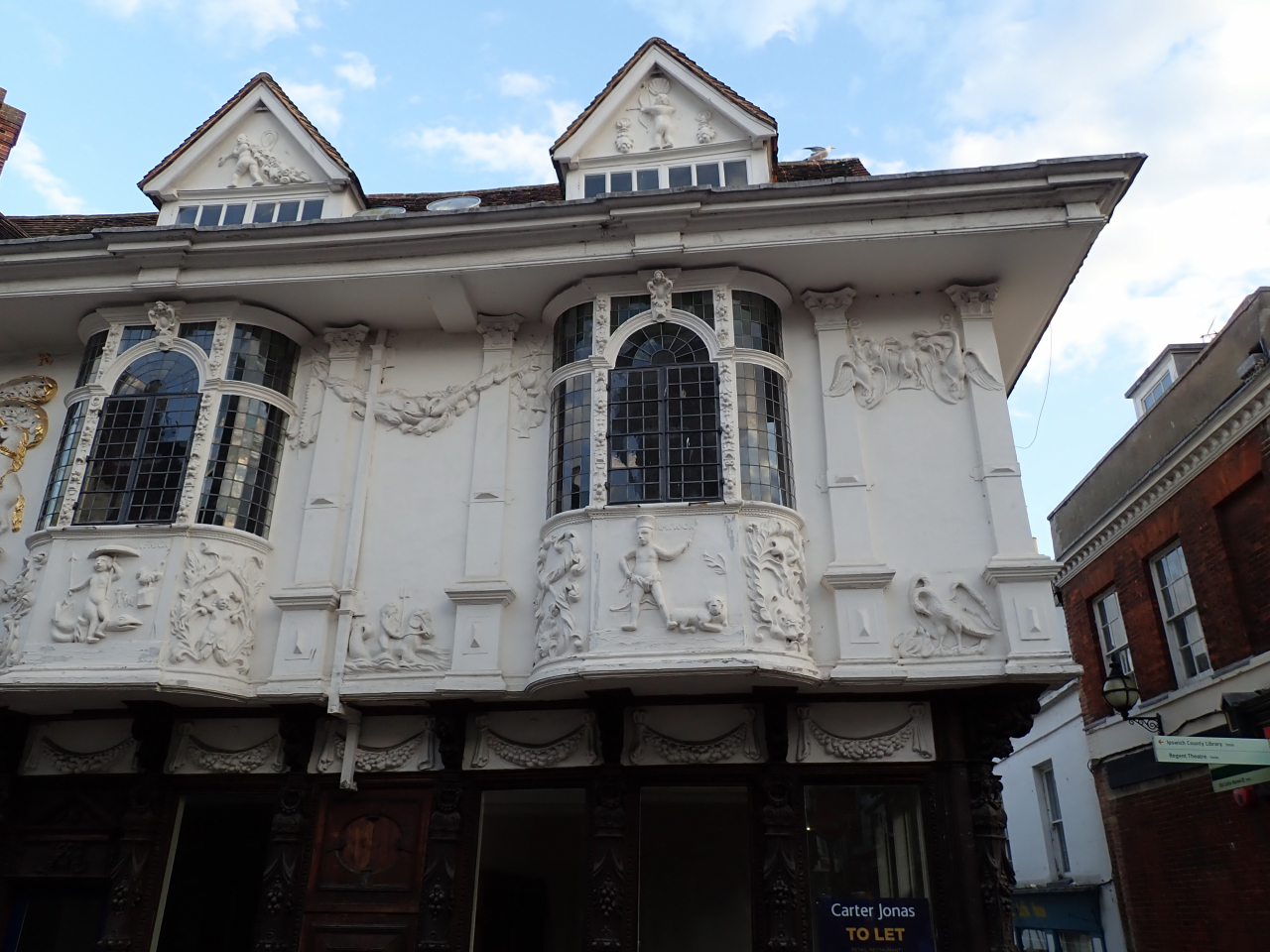 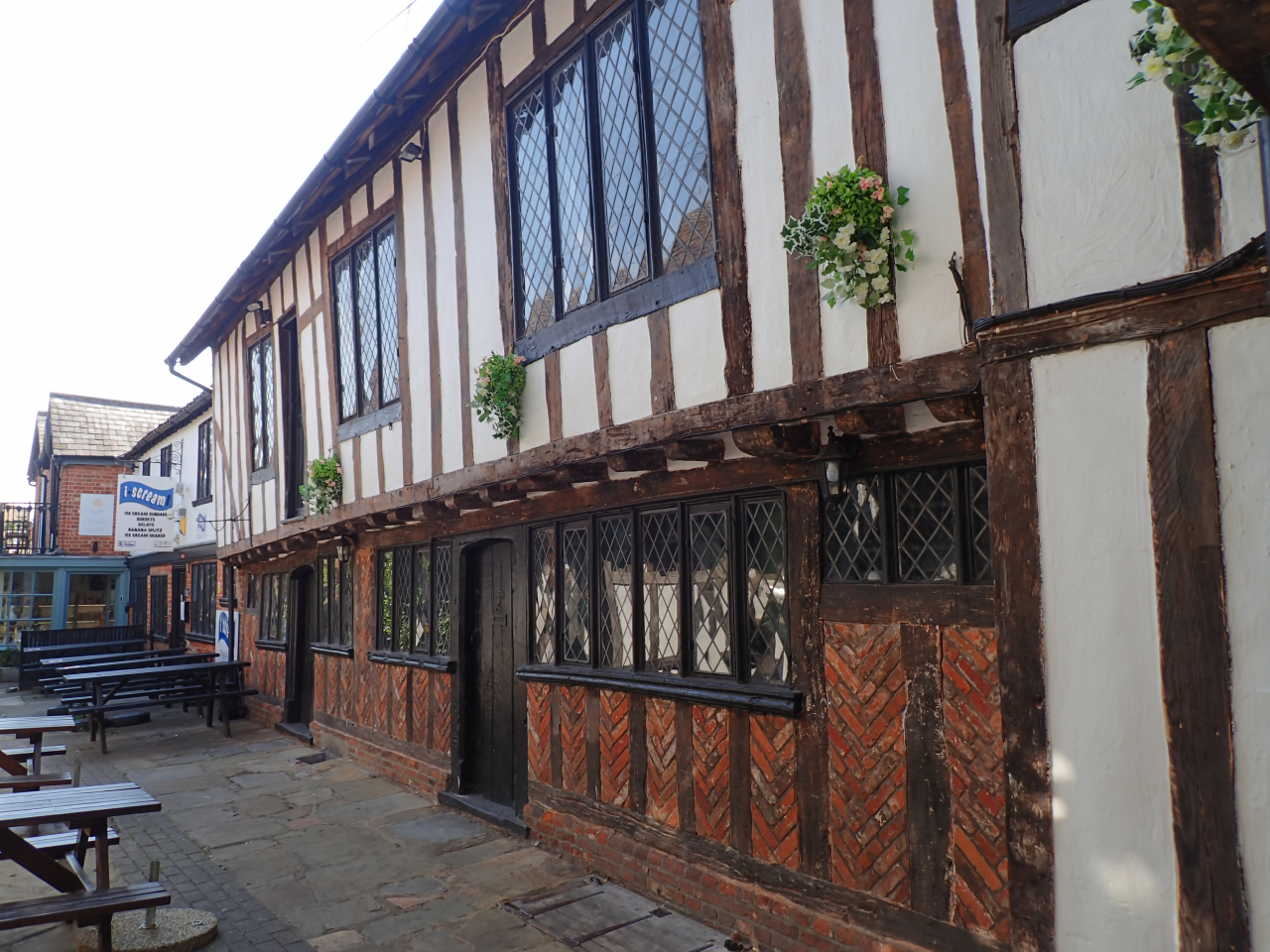 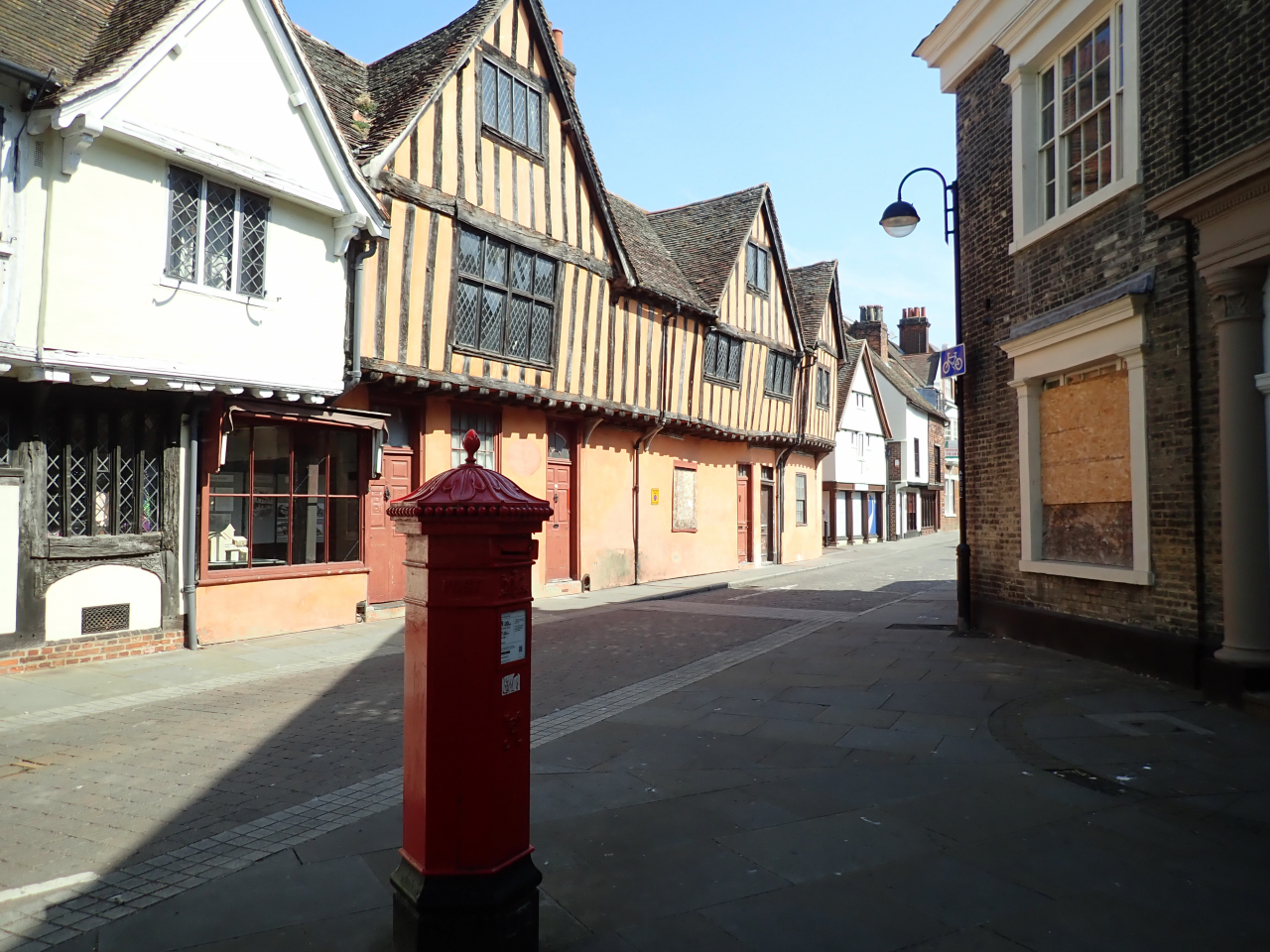 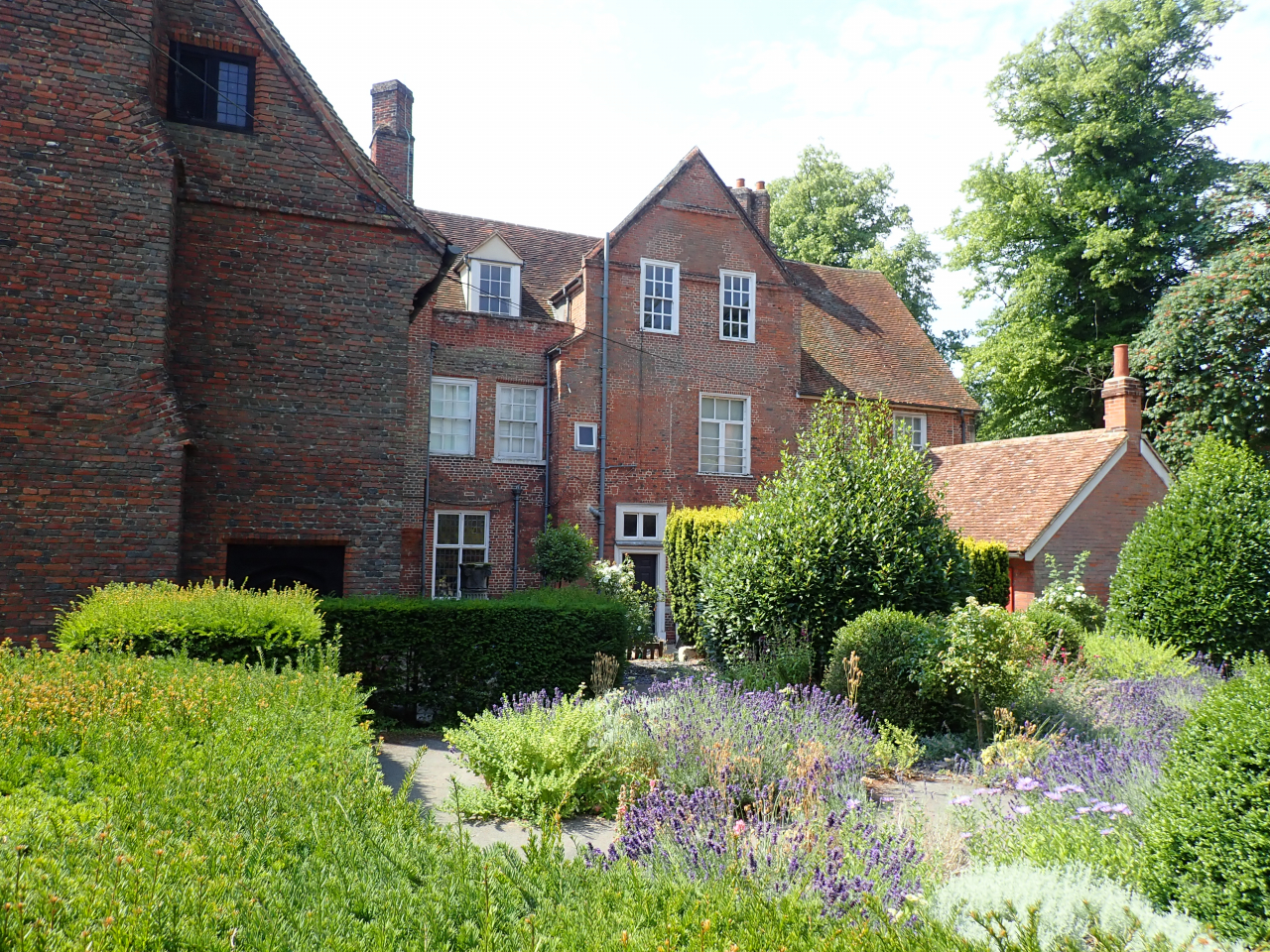 Things happened quickly here. Island girl has been sold to new owners. It was with mixed feelings we unloaded all our possessions and brought them home. The boat was cleaned and made ready for the new owners. We made a final trip on the Orwell to show the new owner how the systems all work. We are glad she will have further adventures with her new family on board.

Thanks for following us on this adventure. Let’s see what adventure life brings next.