When we last updated you we were just preparing to leave A Coruña and sail around the ‘coast of death’. You will be pleased to see that we have survived this and are now on the Spanish Ria’s this is a very popular area for cruising yachts with many fine beaches and towns.

We waited seven days in A Coruña for favourable weather to sail west. We were waiting for the winds to subside and not be gale force. We left before sunrise and headed out on the pre dawn light and the wind came up with the dawn and we managed to have a fast but uncomfortable sail due to the waves and swell, the seas bounce off the coast and you have waves from two directions causing the boat to roll with a very uncomfortable motion.

We had planned to anchor at Corm for the night but we were making good progress so carried on. We were also unsure of how long we might be at Corm as the forecast for the next few days was for strong winds. As we arrived in Muxia the winds had increased to high force six’s and this made getting the sails down interesting. We chose stay to at Muxia rather than Camarinas as the pilot book said that berthing in Camarinas was tight and high winds wouldn’t help make this any easier.

This was a real contrast to the places we had visited recently. The town is popular with pilgrims walking the Camino de Santiago due to a legend about the Virgin Mary travelling here in a stone boat to support the Apostle James ministry. It also claimed that the Apostle body turned up here in a stone boat after he was beheaded in Rome. True or not they have a marvellous church built on the headland and were preparing for a festival.

The festival’s here seem to consist of very loud fireworks, these are rockets that just go bang,no stars or light. These were let off at around 6:30pm each day. We left before the main events that seemed to consist of discos that would go on all night.

The town had the feeling of being a frontier town. A bit like this I might expect to find in a remote island or isolated community. We did enjoy the contrast to the big cities we had spent time in on the North Spanish coast. The weather did deteriorate and the seas looked rough as we walked down to the headland each day.

There were a number of boats in the port waiting to go around the Finisterre and weather was a frequent topic of conversation. We had planned to stay two days but we stayed five. With a favourable forecast us and five other boats all headed out to sea at around 8 am. The sea was calm and the wind blew for about two hours. After this we decided to motor as we wanted to reach Muros. Many of the boats that set off with us decided to stop and anchor near Cape Finisterre. As we approached Muros the wind returned and we were able to sail for the last hour. 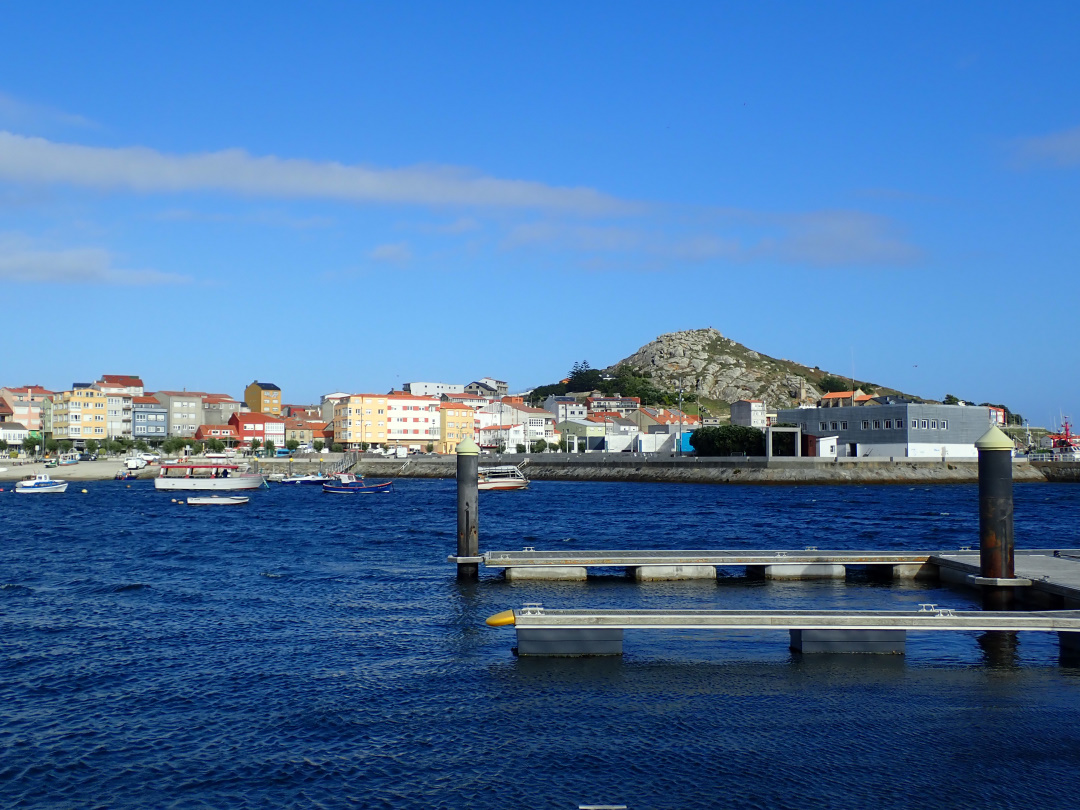 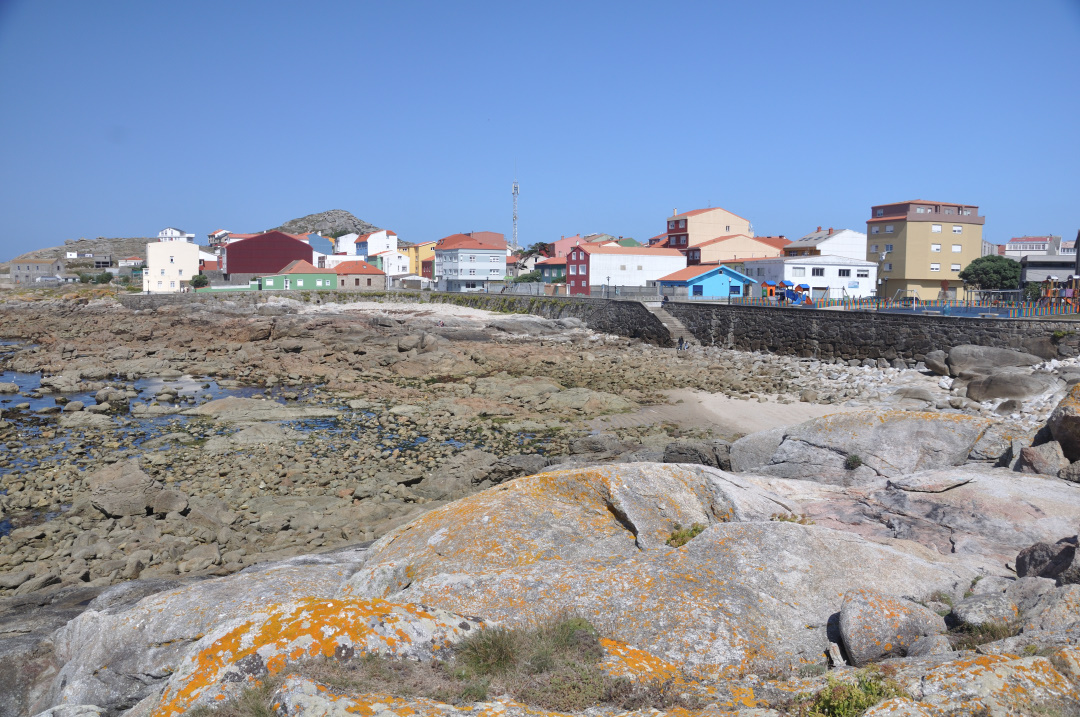 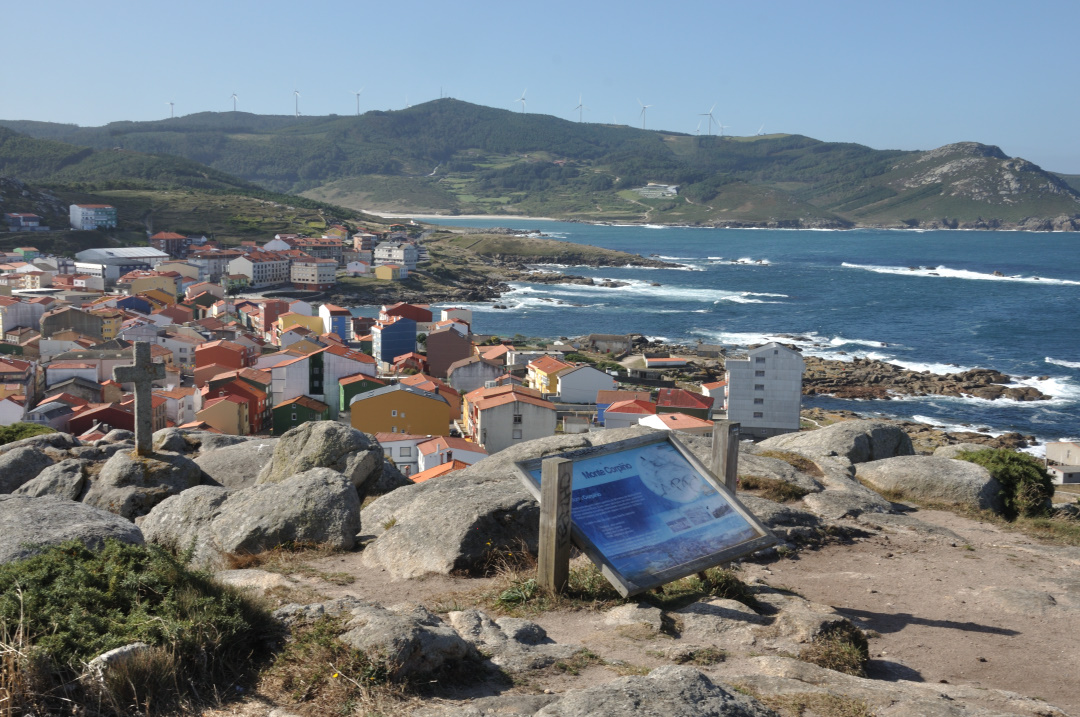 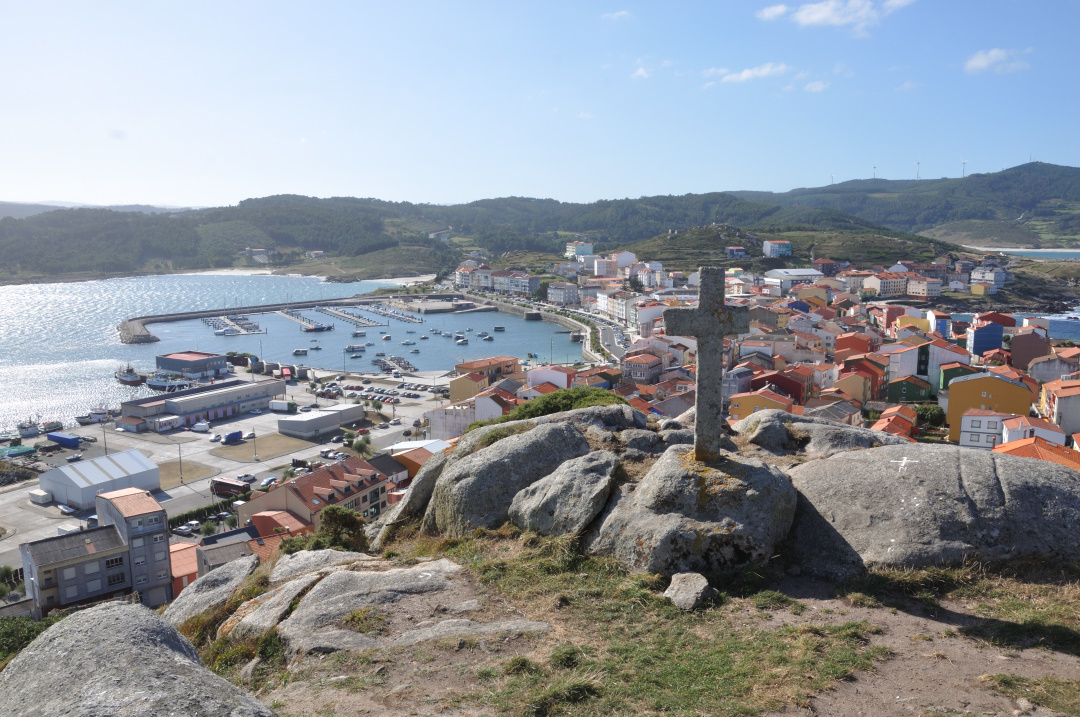 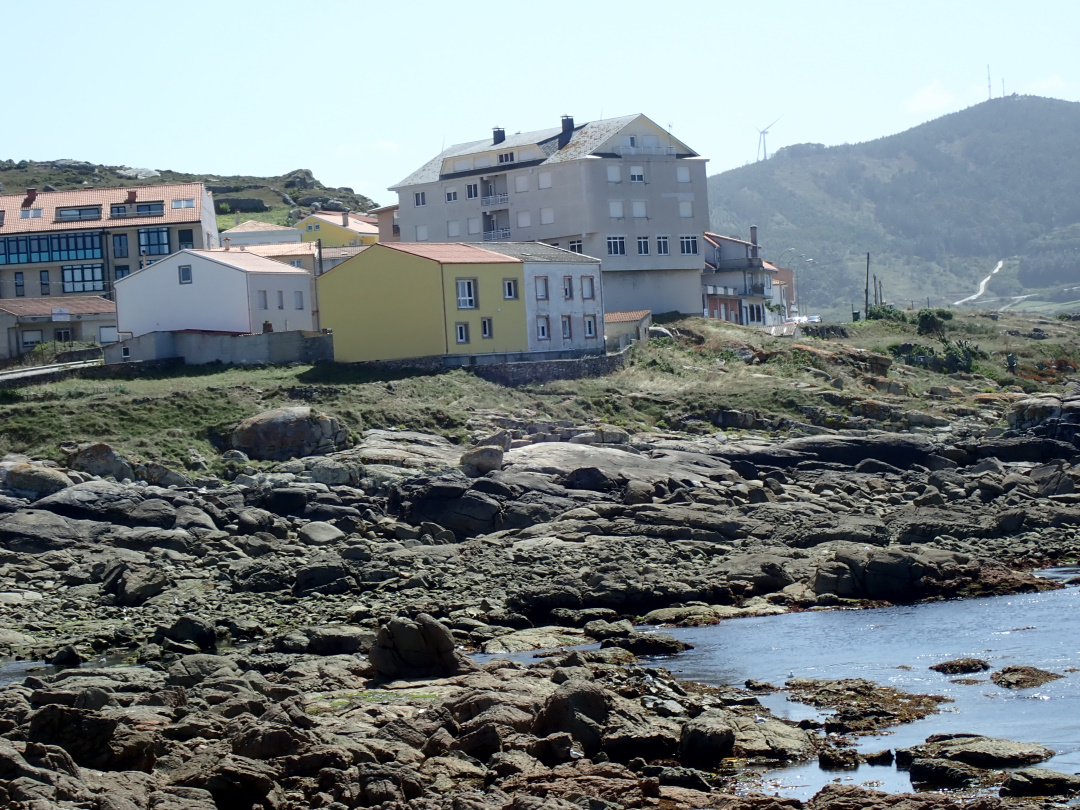 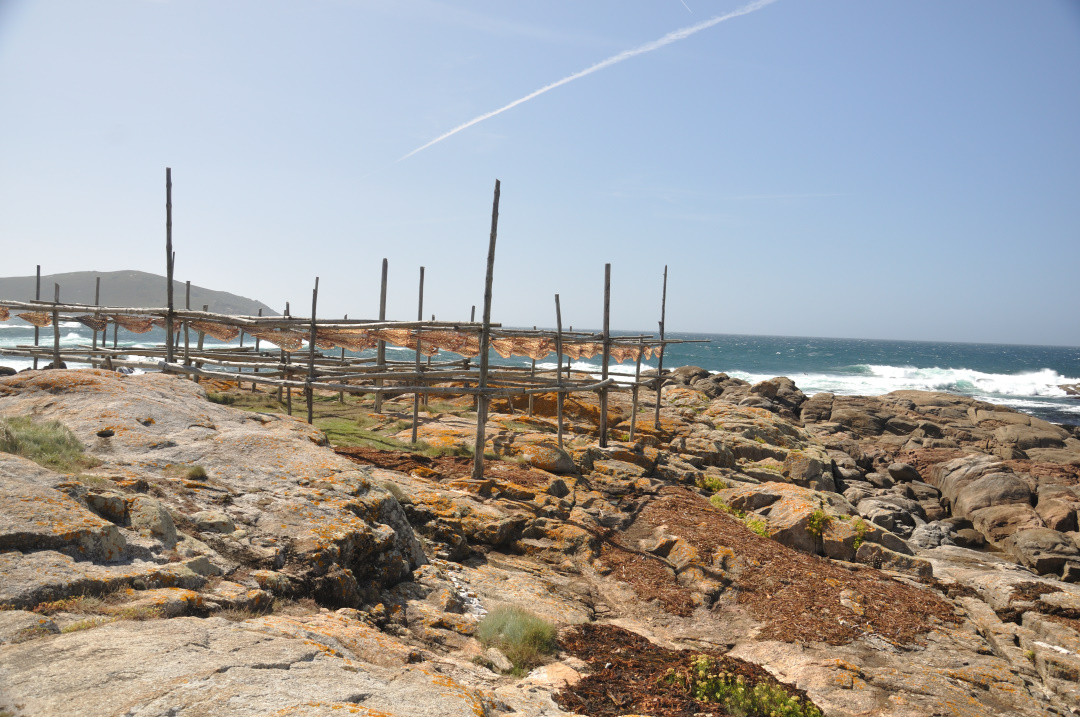 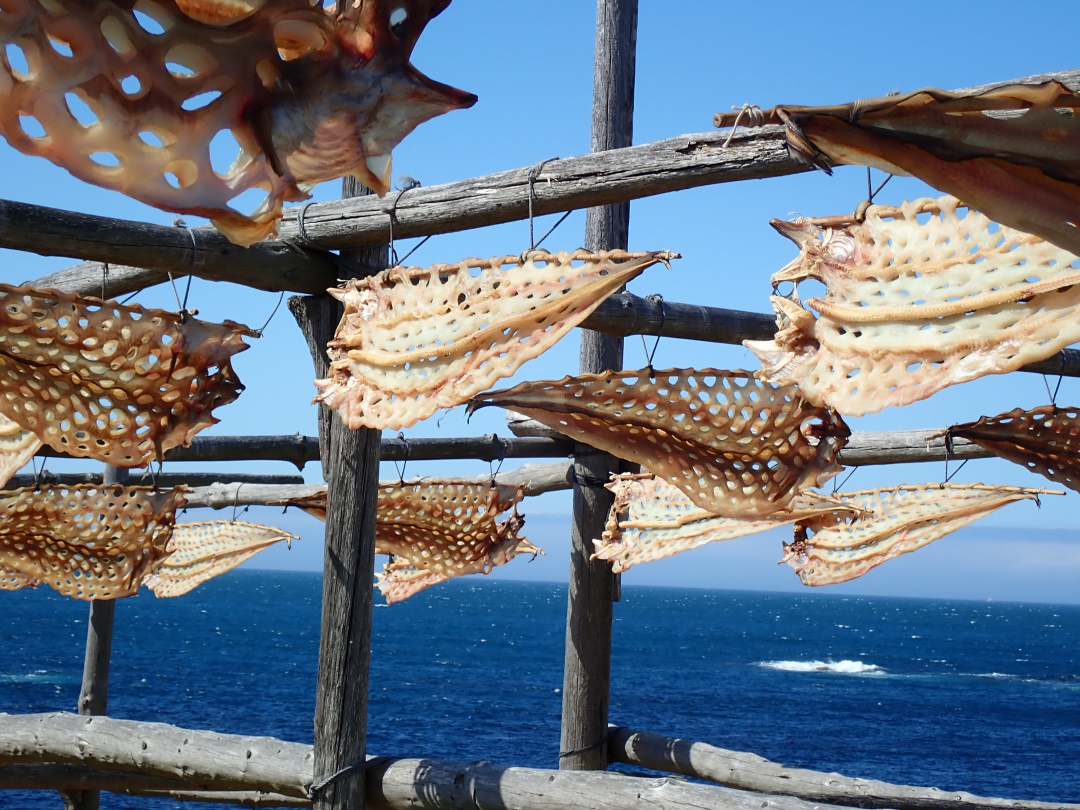 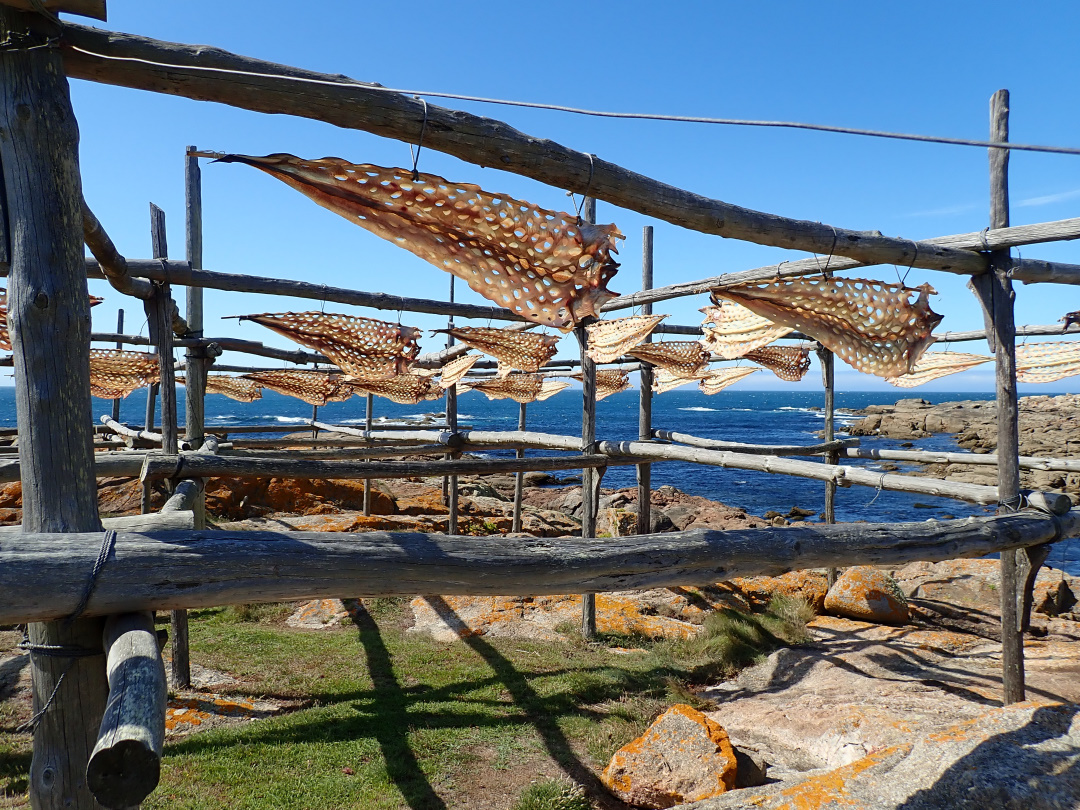 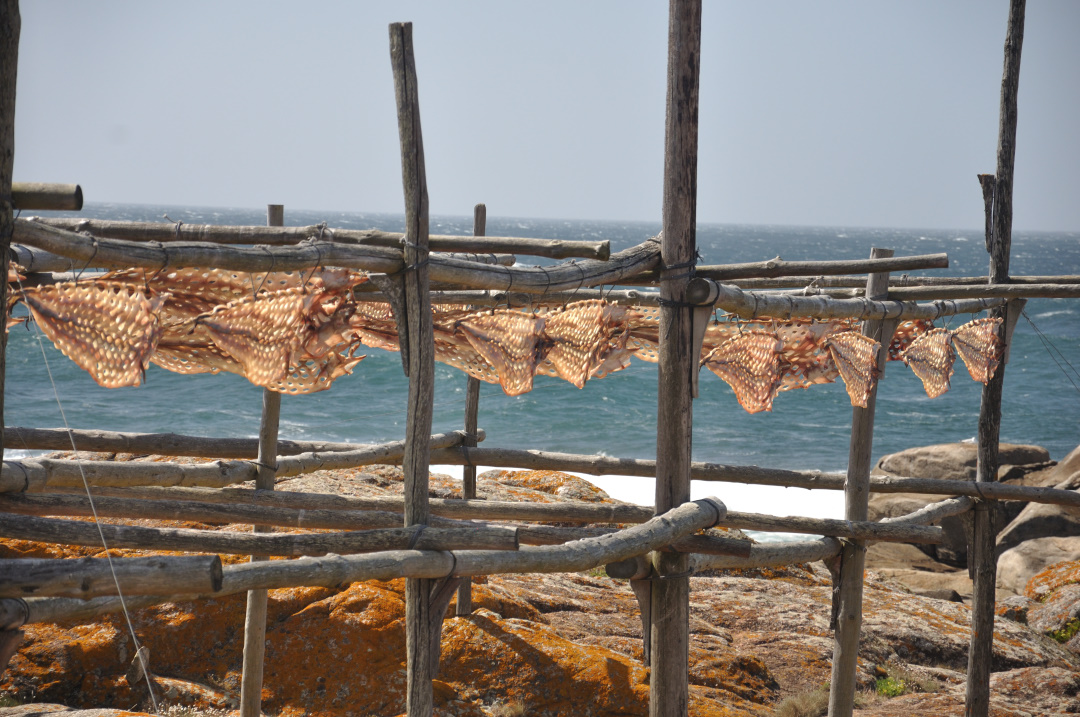 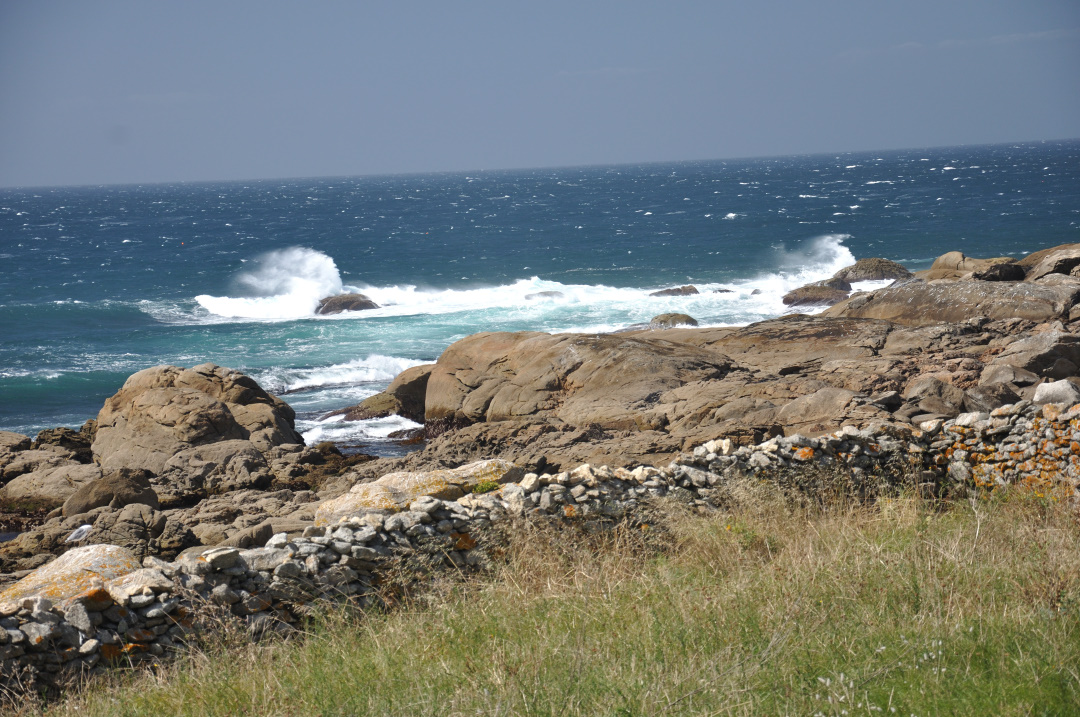 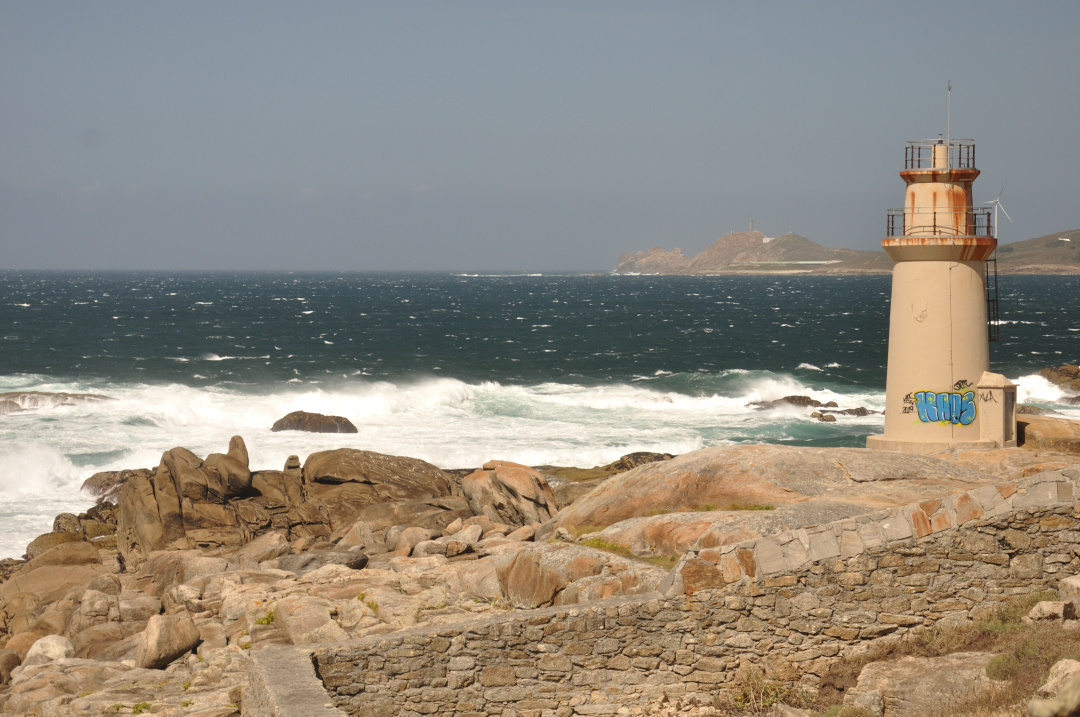 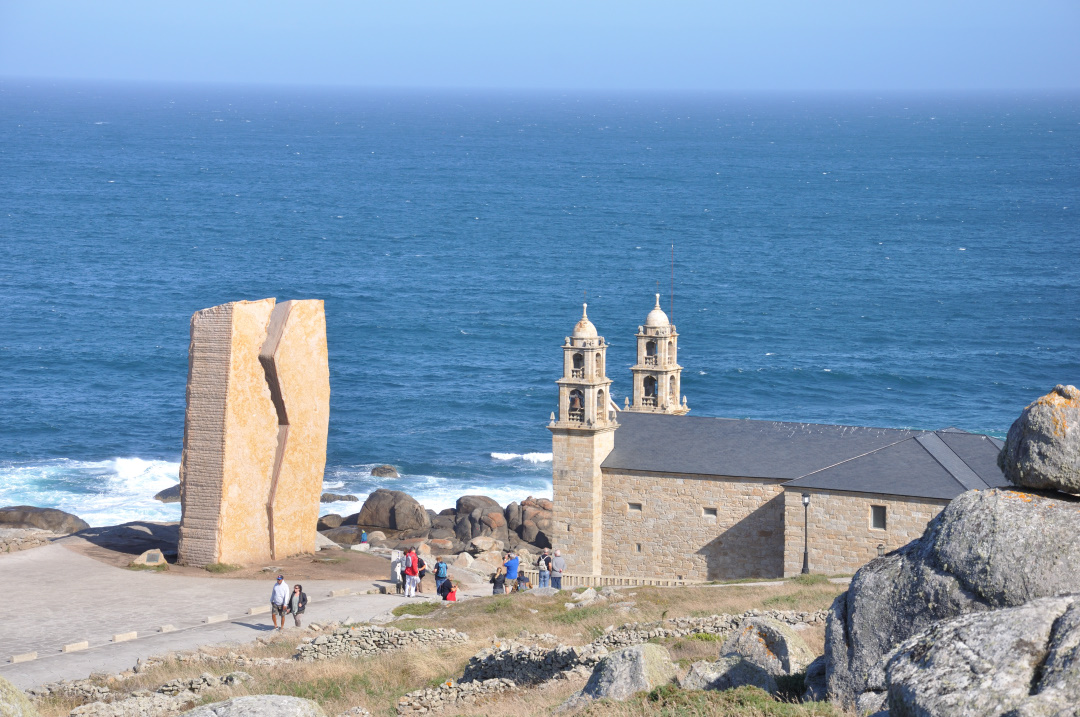 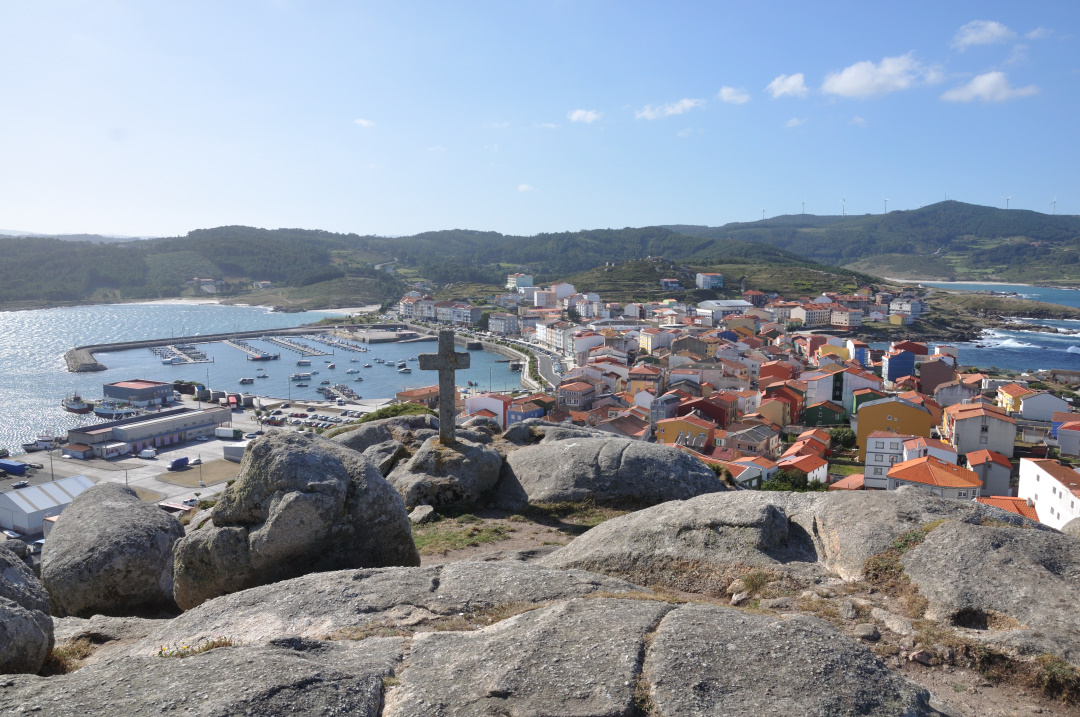 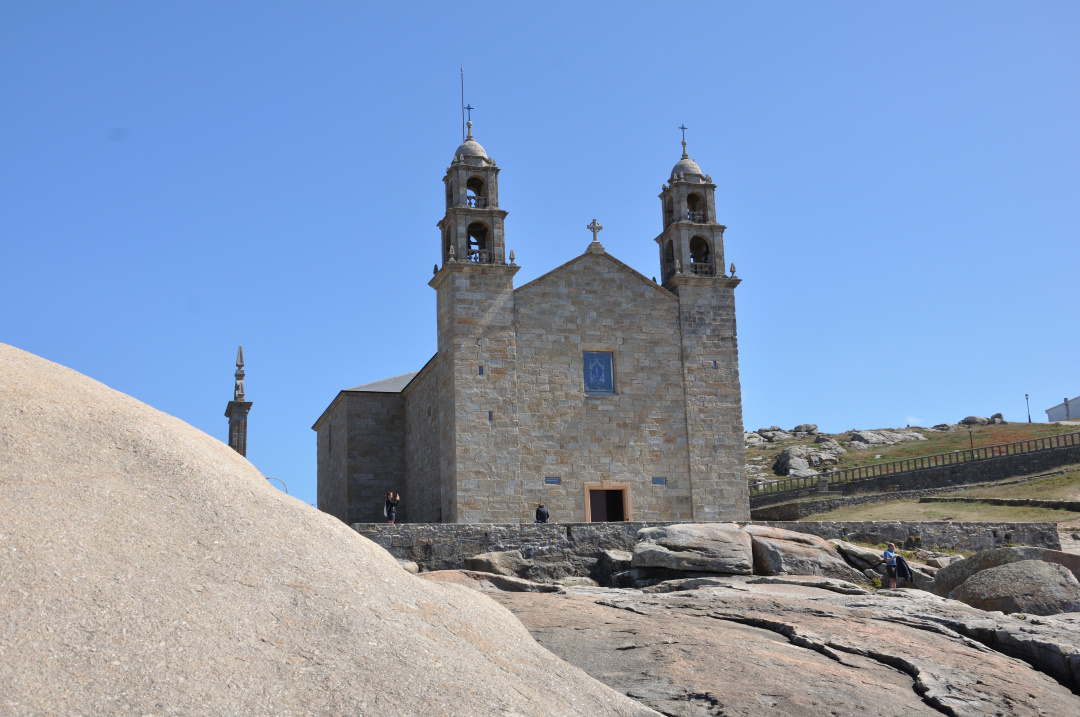 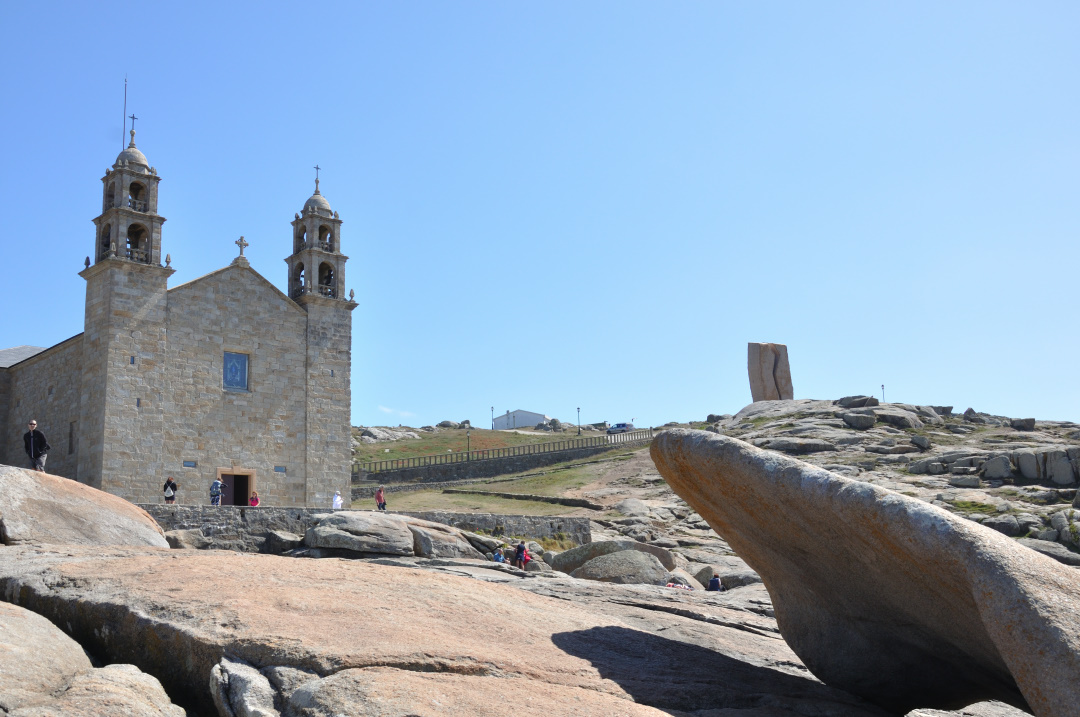 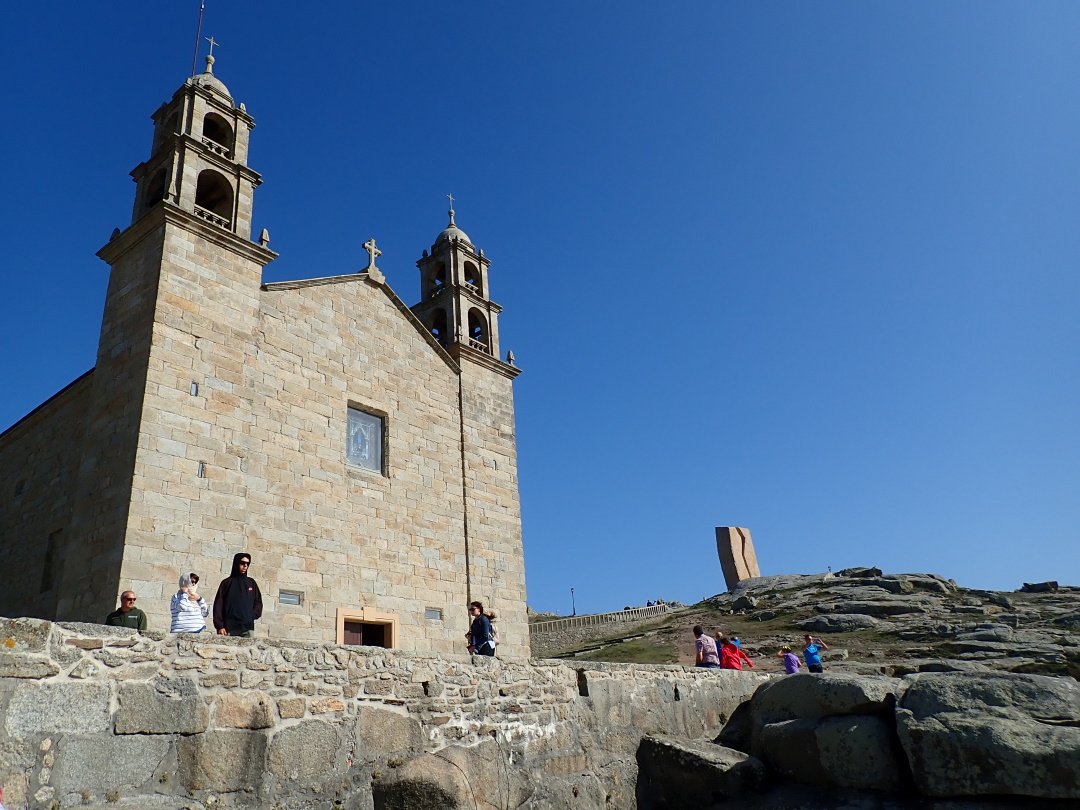 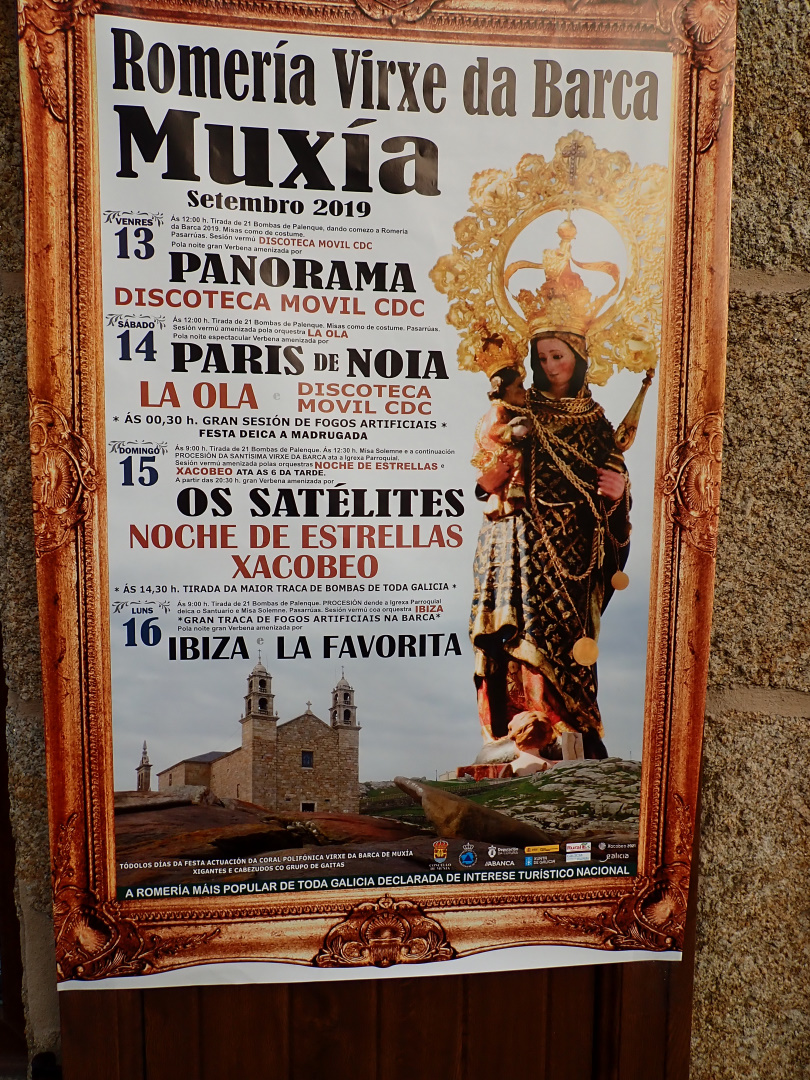 Back in what seemed more like a Spanish town. Again we planned to stay two nights but ended up staying four. This time it was our fridge that detained us. It stopped working an on enquiring to the marina staff they knew a local chap who might be able to fix it. The fridge had lost its gas. It is working now but we are not sure for how long as he could not find the leak. Judith also used the time to carry out some maintenance.

Muros was a maize of narrow streets on a steep hill side. The local old people must be extremely fit as their community centre was half way up a steep lane with no car access.

Loud public discos seem to be a feature of Spanish life as Muros had one planned for Friday and Saturday night. We left them to it and sailed on Friday morning. 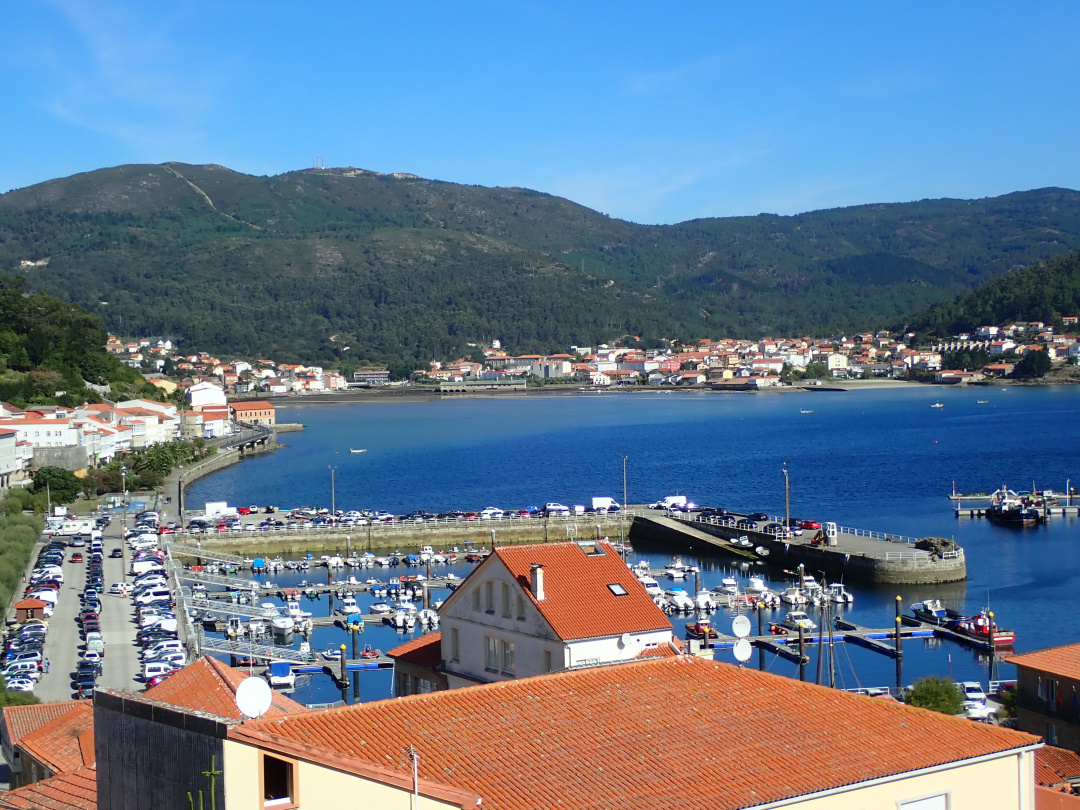 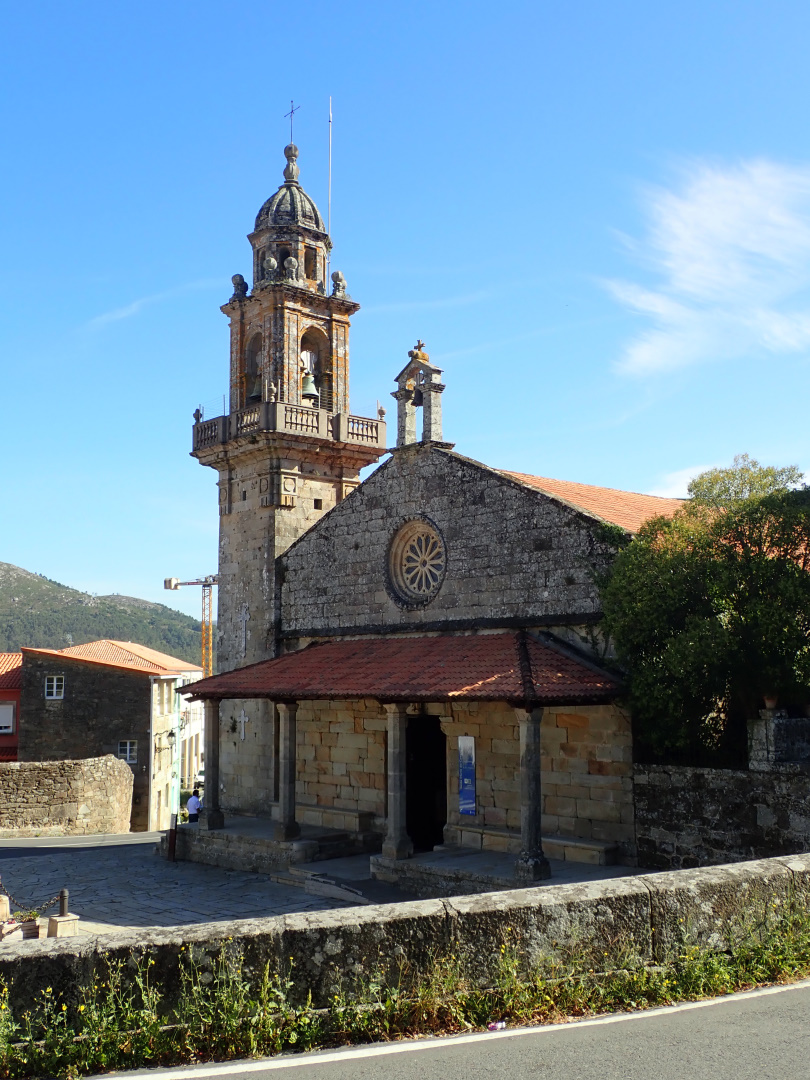 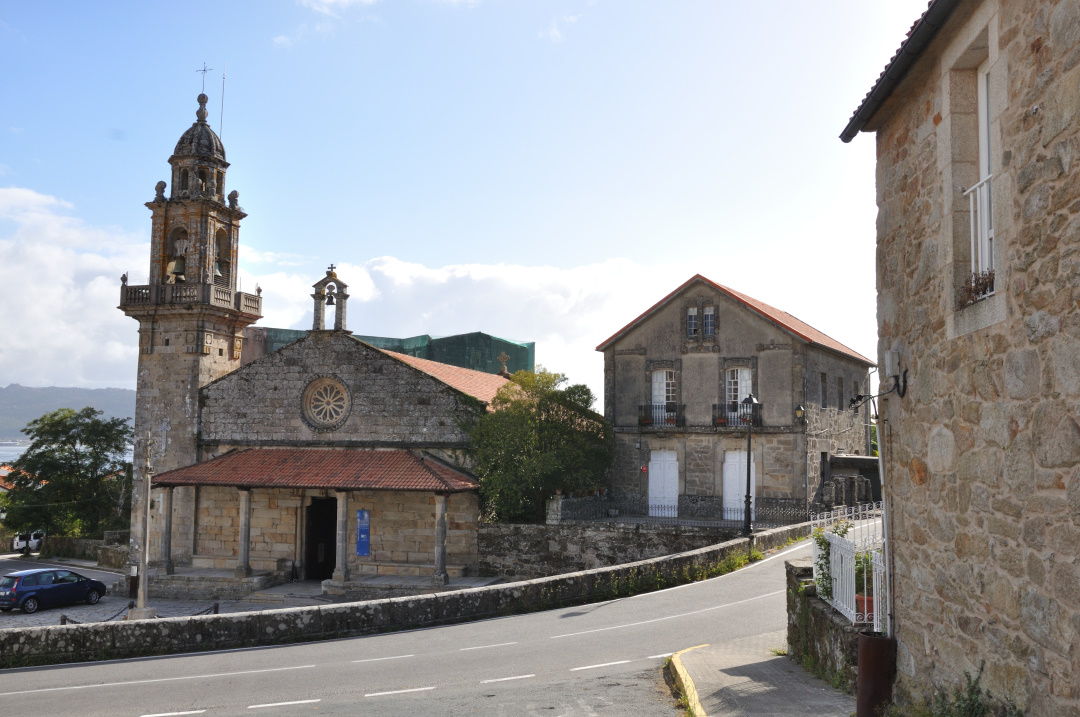 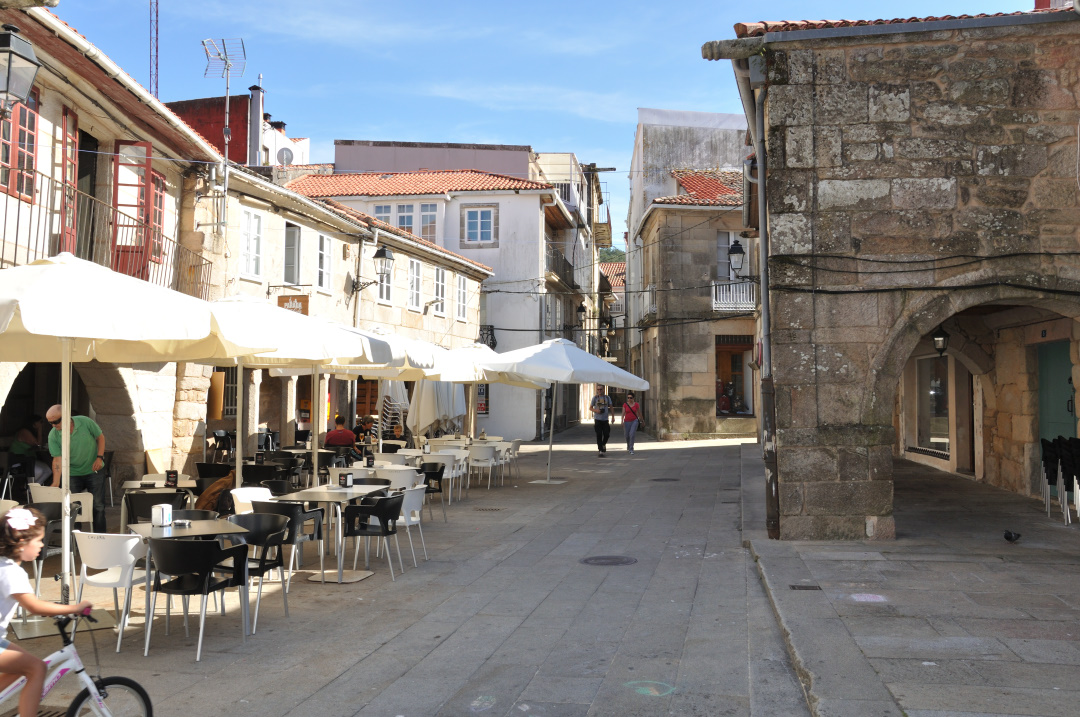 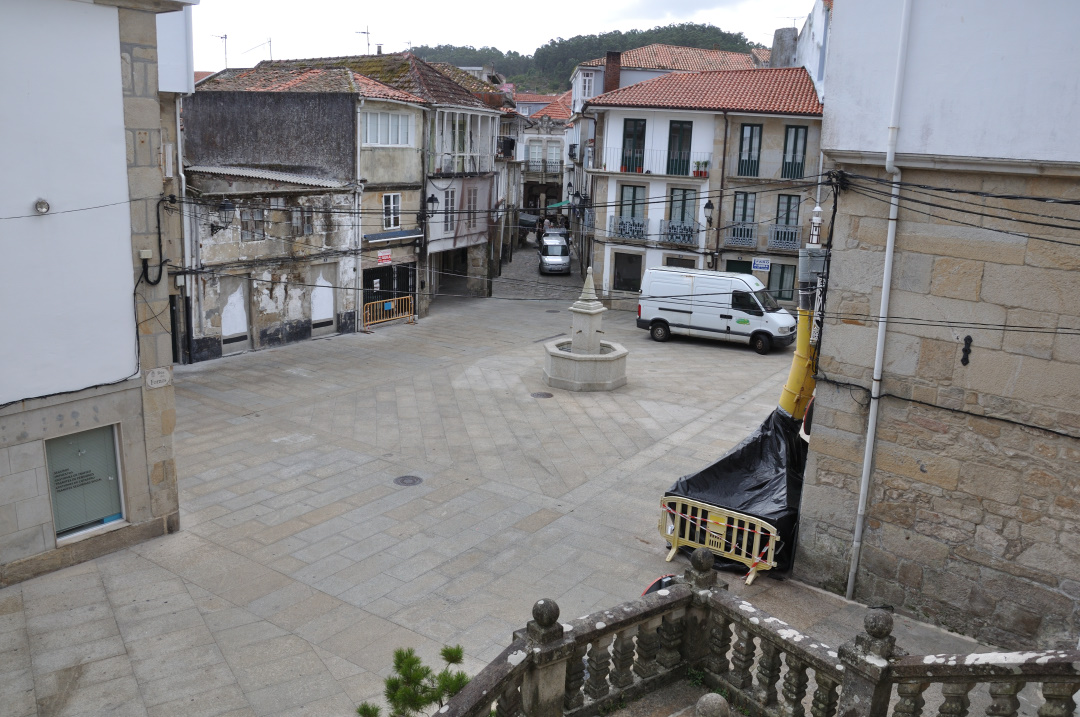 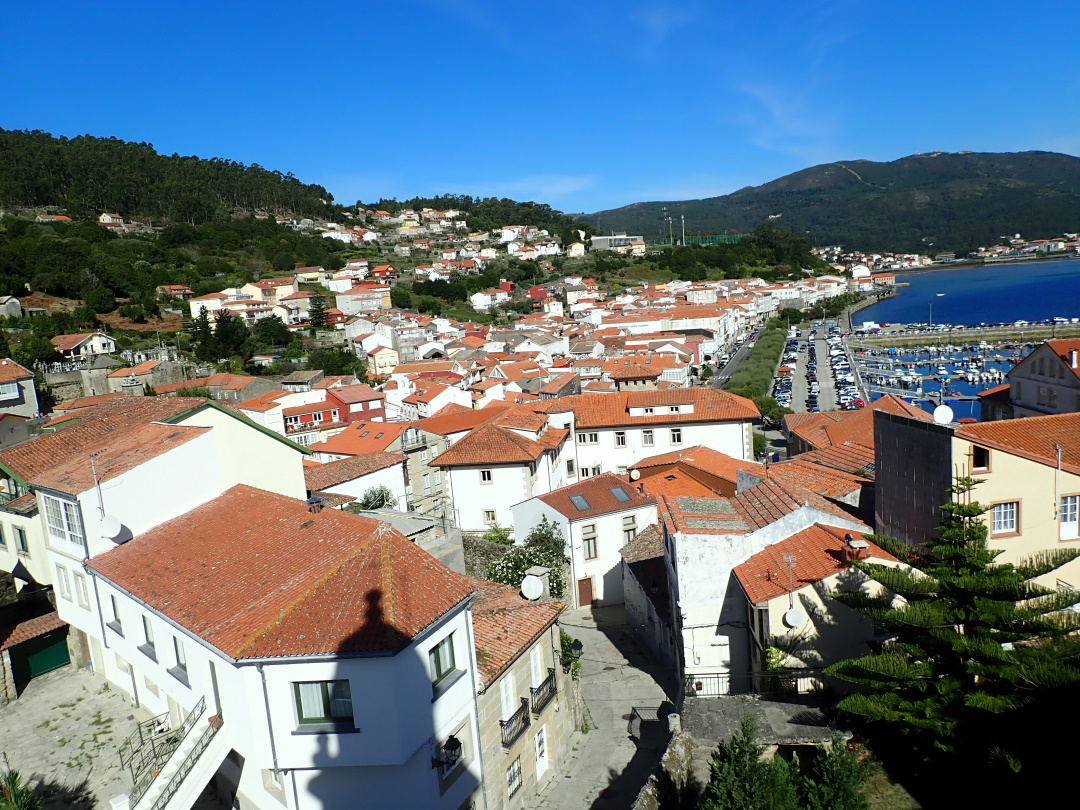 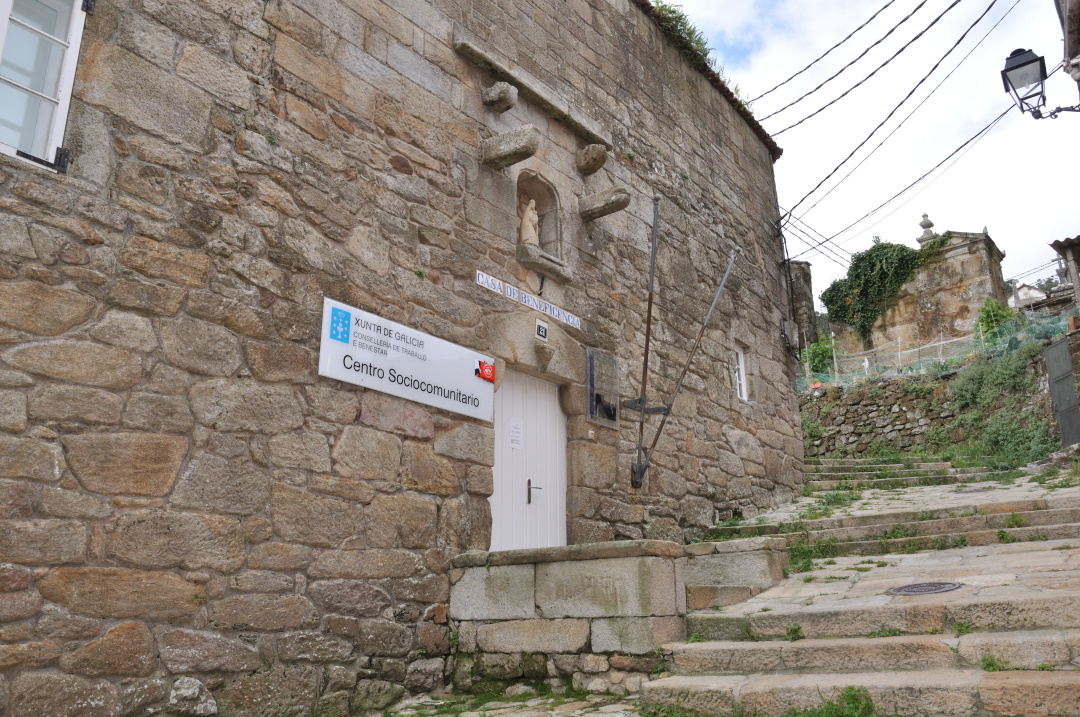 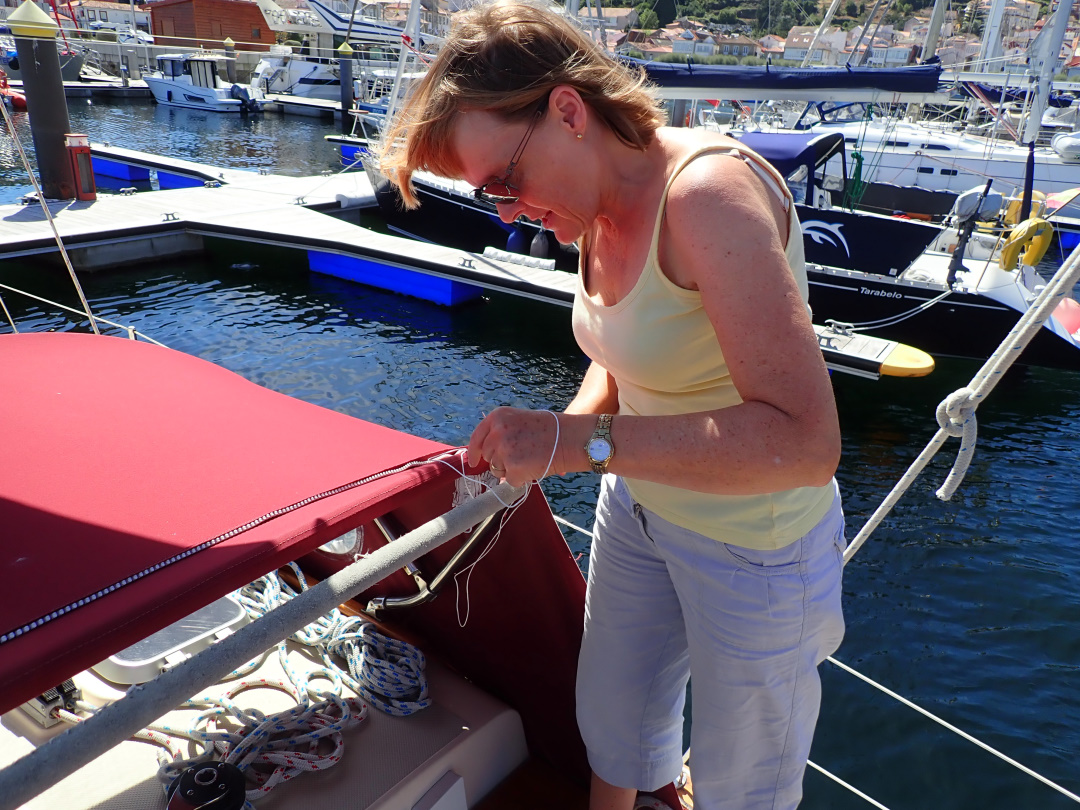 We were heading in to the Ria de Pontevedra and on to Combarro. We had swaped our small head sail for a larger genoa as we we expecting lighter winds. We headed out, the wind blew and the boat was flying along at 8 knots the sea was calm and all was good in the world. However this was too good to last and mid morning we were drifting so back on goes the engine. Later in the day the wind was back and we were able to sail the last part to San Vicente del Mar. We planned to anchor off the beach for the night. We found a spot, the anchor held fine first time and we had a drink. We rowed ashore and enjoyed a walk on the beach. Upon returning to the dinghy a Spanish father approached us, his daughter was fascinated by our dinghy and would it be possible for them to take a photo of her in it before we left. The girl got wet when wave broke over the boat however the family enjoyed this and the girl was happy. The winds built up again through the evening and in to the night which was not conducive to a good night’s sleep. In the morning we weighed anchor and made the short trip to Combarro. As has been typical, good sailing for a hour or so before the winds die to nothing. 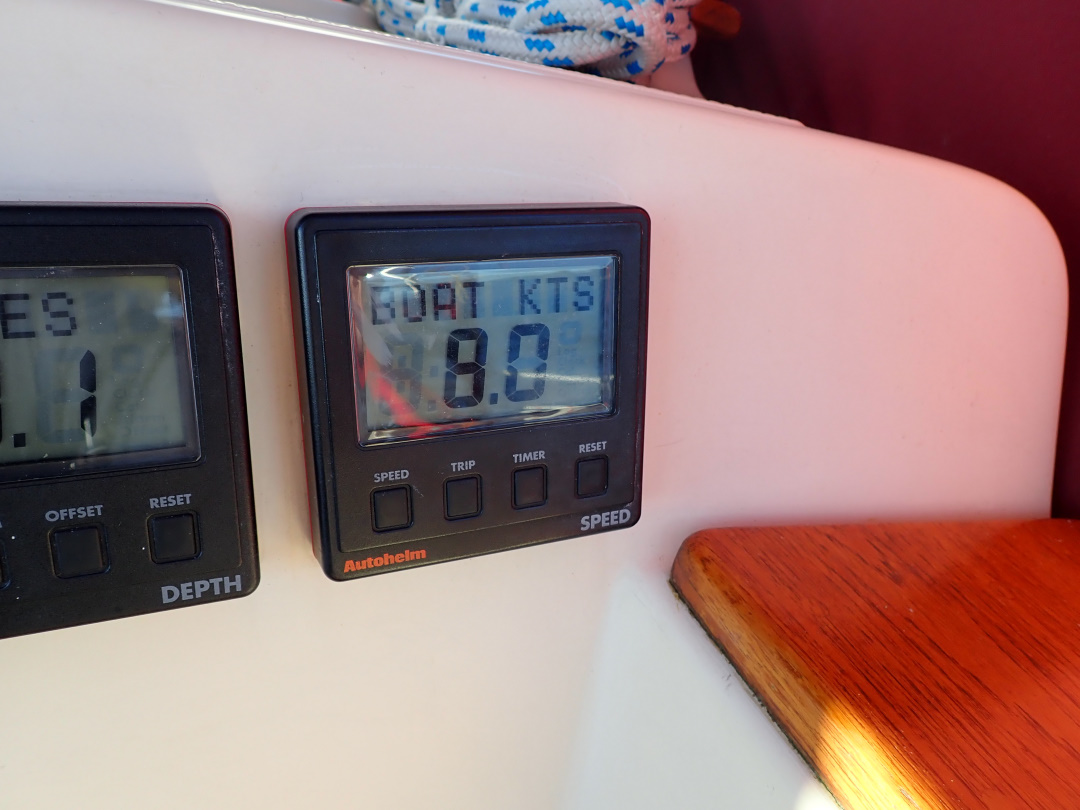 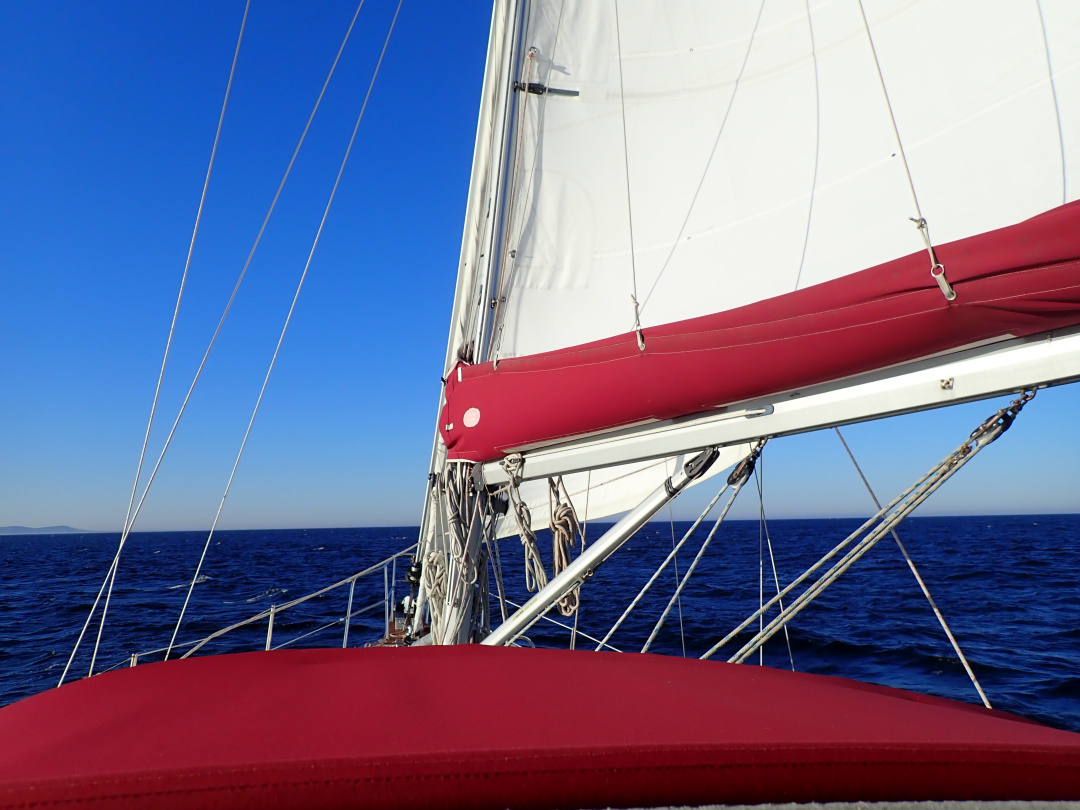 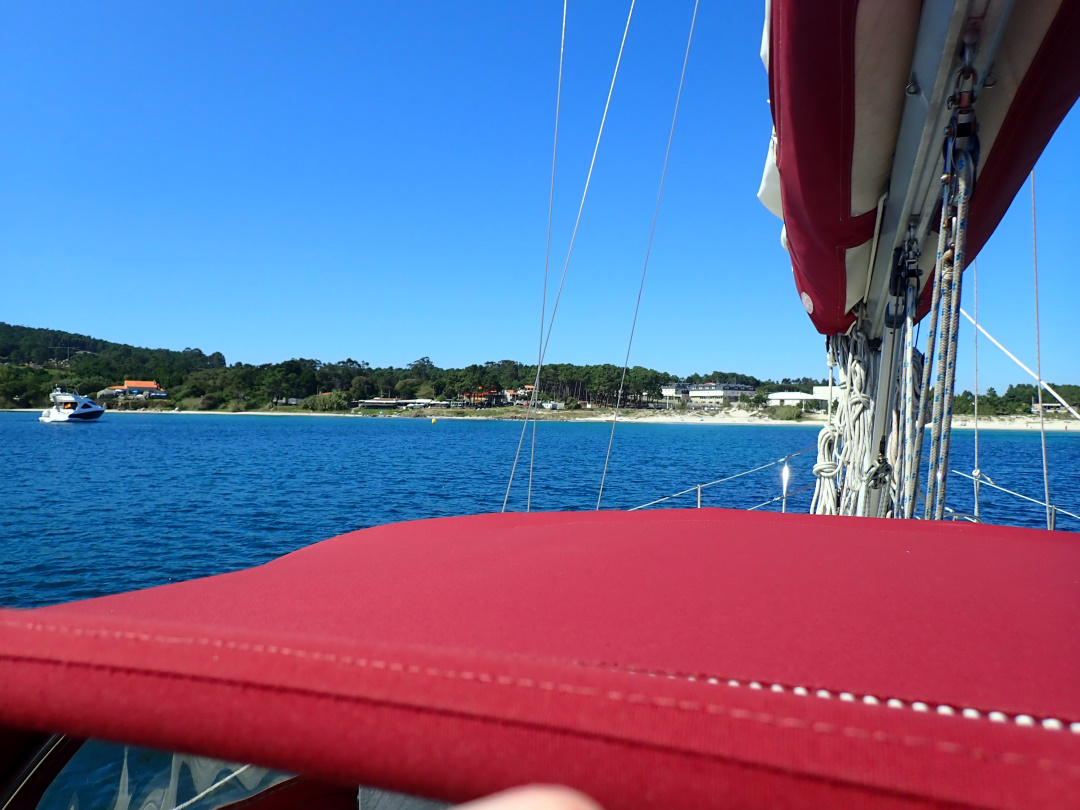 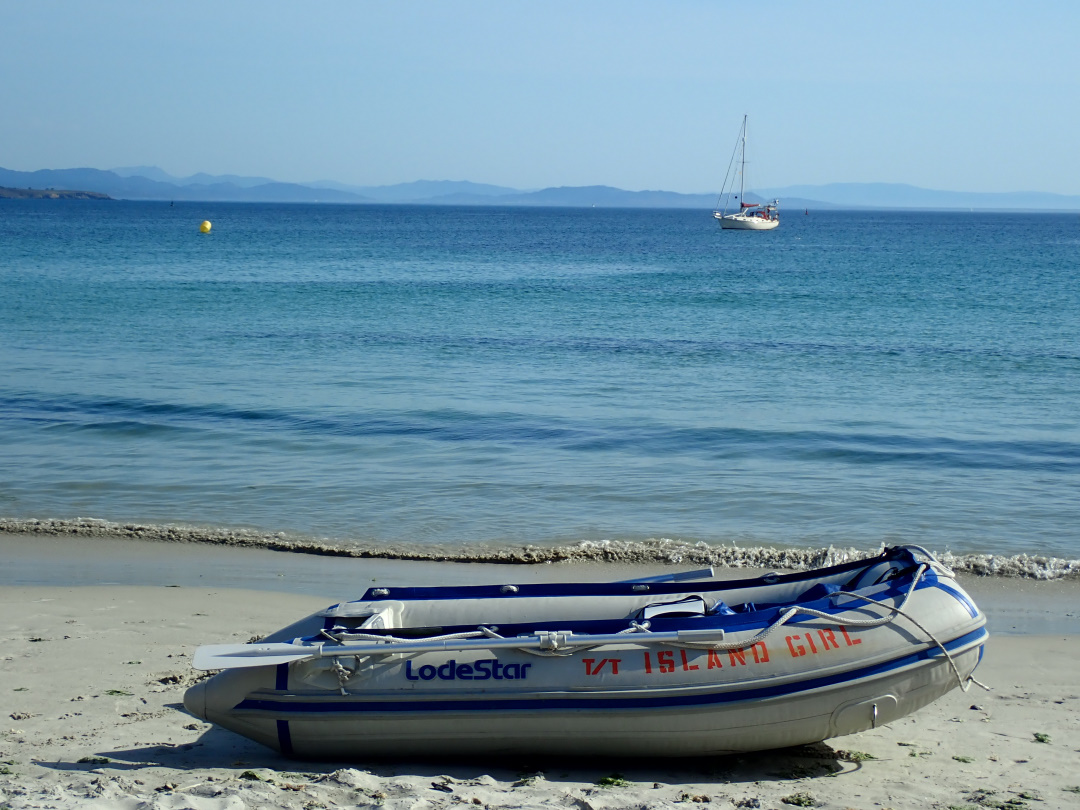 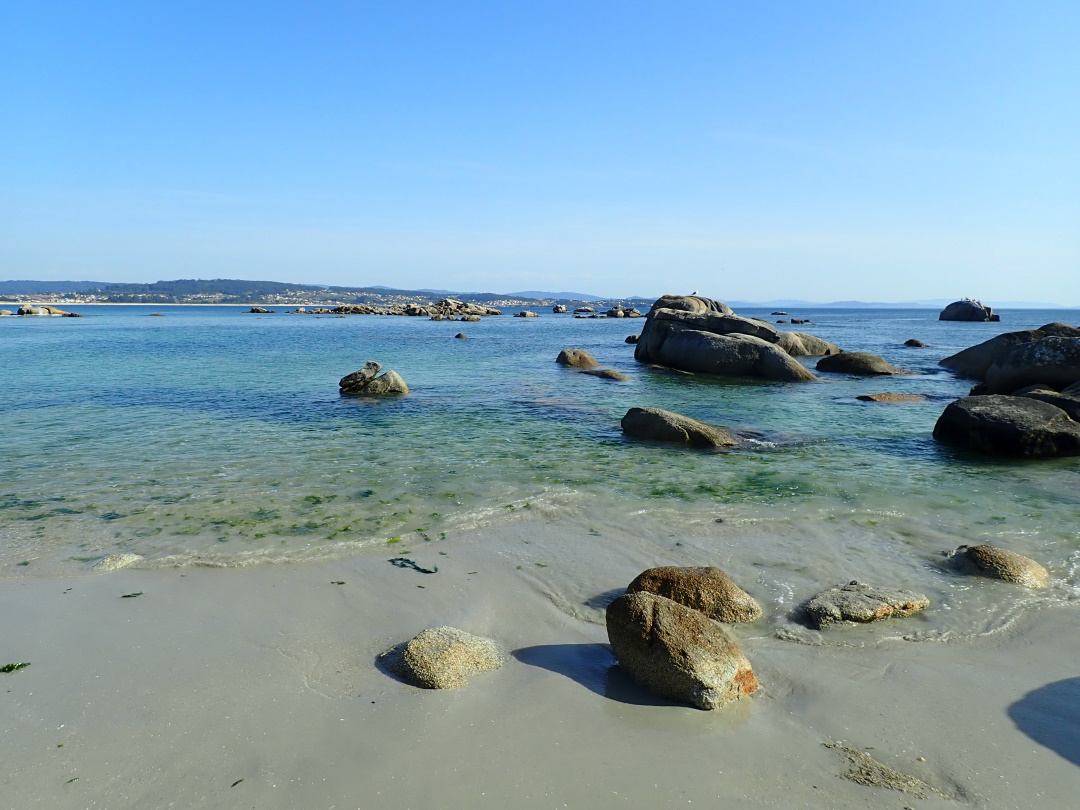 Will write about Combarro when we have had time to explore.